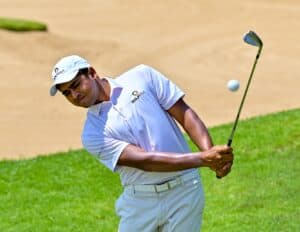 GolfRSA National Squad member and No 1-ranked Yurav Premlall will make his debut for South Africa in the GolfRSA Senior Protea Team at the African Amateur Stroke Play Championship at the magnificent Leopard Creek in February 2023.

CAPE TOWN, 10 December 2022 – GolfRSA National Squad members Yurav Premlall, Jack Buchanan and Amilkar Bhana, as well as Keagan Crosbie will wear the green and gold for the first time when they debut for South Africa in the African Amateur Stroke Play Championship at the magnificent Leopard Creek in 2023.

The quintet has been named to the GolfRSA Senior and Junior Protea teams that will represent the country in the 54-hole team competition that is played concurrently with the first three rounds of the 72-hole international stroke play championship from 6 – 9 February.

“Keagan, Jack and Amilkar debut on the GolfRSA Junior Protea Team alongside Dan Bennett, a member of our 2021 junior team. All eight golfers have performed consistently well this season and we excited to see them in action at Leopard Creek.

“The championship annually draws a large number of top-ranked international amateurs and we have witnessed some fantastic battles in the team competition since the first event in 2016. We are confident that have selected two strong teams to lead the South African challenge. It is a wonderful opportunity to give these rising talents the chance to compete against the top competitors from abroad.”

Premlall reached the No 1 position on the GolfRSA Open Rankings in a season where he never finished outside the top 10. Not only did he win three times on home soil, but he enjoyed his first international success in the MCB Indian Ocean Open in Mauritius in October.

Potgieter made his South African debut in the World Amateur Team Championship in France this year. In addition to his record-setting victories on the GolfRSA Junior circuit and a pair of wins on the Open Amateur circuit, Potgieter became only the third South African to lift The Amateur Championship title, joining Jovan Rebula (2018) and Bobby Cole (1966).

The pair also did the country proud serving on the International Team in the Junior Presidents Cup, contributing 4.5 of the team’s 11 points.

De Beer is the only member of the victorious 2022 Senior Protea side to return for duty, while Broomhead will make his third appearance for South Africa. The pair shared in the GolfRSA Protea Team’s record 24th victory in the Africa Region 5 Golf Tournament in Angola in May, while Broomhead won the Individual Competition in the 2022 All Africa Golf Team Championship in Egypt, where Team South Africa placed second.

“We are quite excited about the GolfRSA Junior Protea Team named for the 2023 African Amateur Stroke Play Championship,” said Smith.

“Earlier this year, Dan was a member of the GolfRSA Junior Protea Team that swept to a 29-stroke victory in the All Africa Junior Championship in Egypt, and went on to claim a fourth-place finish in the prestigious Toyota Junior Golf World Cup in Japan. We believe the three rookies on the team will benefit greatly from his experience at international level, and his knowledge of the championship course at Leopard Creek.”

Crosbie and Buchanan both enjoyed breakout seasons, rising to second and third respectively on the GolfRSA U-19 Rankings, while Bhana, at fourth in the standings, continues to impress.

Gauteng North’s Crosbie not only won twice on the GolfRSA Junior circuit this year, but he also reeled in four top five finishes in his other eight starts that saw him vault into the top four. Buchanan, a member of the victorious Western Province teams in the Premier SA and SA U-19 Inter-Provincials last year, racked up six top 5 finishes at home, and also performed well abroad, finishing seventh in the English U-18 Amateur Championship and 14th in the Carris Trophy.

Bhana, the winner of the Reply Italian International U-16 Championship in 2019, has been one of our most consistent players on the GolfRSA Junior circuit for a few years now. Once again, despite academic pressure and a limited schedule, he produced six top fives, including two runner-up finishes and a joint third in the Nedbank Junior Challenge this year.

“The African Amateur Stroke Play Championship presents us with a fantastic opportunity to give our leading Open and Junior amateurs the chance to test themselves against top international competition, and we applaud the selection committee on their selections,” said GolfRSA CEO Grant Hepburn. “They have named eight in-form amateurs to fly the flag for South Africa, who are thoroughly deserving of the honour, and I am confident that these teams will do us proud at Leopard Creek.”

The GolfRSA Senior Protea Team will be managed sports psychologist Theo Bezuidenhout, who works with the GolfRSA National Squad, while biokineticist and national squad fitness trainer Gavin Groves will look after the Juniors.