At the recent Sanlam SA Women's Stroke Play Championship, Sally Greasley took over the mantle as Womens Golf South Africa's new president from Karen Olivant.
We asked Sally to talk to us about her passion for golf and the administration thereof and her thoughts on the current state of the game in South Africa.
Read More →

We sat down with outgoing president Karen Olivant to find out more about the highs and lows of her six-year tenure at Womens Golf South Africa. We also found out where her passion for golf administration began and how she plans to spend her 'retirement'.

She might be playing a limited schedule this season, but Menlo Park High School matriculant Danielle du Toit is making every start count. She won the North West Championship in February and on Sunday, the 18-year-old repeated the feat in the ProShop 36-Hole Junior Championship at Country Club Johannesburg.

South Africa’s top ranked Kajal Mistry holds all the cards after she opened up a yawning gap on the chasing pack in the second round of the Sanlam South African Women’s Amateur Stroke Play Championship on Monday.
Mistry shared the overnight lead at three under after opening with a 69 at the Wanderers Golf Club, but she underlined her status as Womens Golf South Africa’s 2015/2016 Player of the Year when she pulled five strokes clear on the field.

A near-death experience when Ernie Els was just starting his career certainly gave the four-time Major champion an appreciation for the value of life. And it’s perhaps no surprise that he’s since become one of golf’s most ardent supporters of charity. 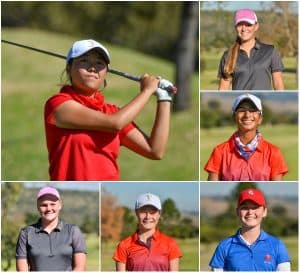 Gauteng North’s Danielle du Toit benefitted from extra work with the putter to charge into a three-way tie for the lead in the opening round of the Sanlam South African Amateur Stroke Play Championship on Sunday.
The reigning Nomads SA Girls champion racked up five birdies at The Wanderers Golf Club to join South Africa’s top ranked Kajal Mistry and Woo-Ju Son at three-under-par 69.

In early April, Kaiyuree Moodley threw her name in the hat of prime contenders for this year’s Sanlam South African Women’s Stroke Play Championship when she scored a come-from-behind victory in the prestigious Nomads SA Girls Rose Bowl Championship.

Kajal Mistry. Woo Ju Son. Chiara Contomathios. Danielle du Toit. Kaiyuree Moodley. All juniors and all winners on the Womens Golf South Africa circuit this season. And the odds are good that one of them will step onto the podium in this year’s Sanlam South African Amateur Stroke Play Championship, says defending champion Kaleigh Telfer.

Bouch and Traut give SA edge at RAACT

Royal Durban Country Club may have been bathed in sun for much of the day, but the conditions belied the severity of gusts that proved hugely challenging for the juniors competing in the first two rounds of the Nomads SA Girl’s Rose Bowl Championship on Monday.

Junior golf in South Africa has received a timely lift with the announcement of a brand new national series of events that will culminate in two players qualifying to take part in the North and South Junior at Pinehurst, North Carolina in the United States of America next year.

A pair of 67s from Luca Filippi and Kajal Mistry at Royal Harare Golf Club put the two South African teams in an undeniably strong position on moving day at the 2017 All-Africa Junior Golf Championship in Zimbabwe.

SA teams battle but hang on to All-Africa Junior lead

Tough pin positions and gusting wind led to considerably higher scoring and the two South African squads had to dig deep to stay ahead of the opposition in round two of the All-Africa Junior Golf Championship at Royal Harare Golf Club on Wednesday.

SA juniors off to great start at All-Africa Junior

The South African junior teams made a promising start in the 2017 All-Africa Junior Golf Championship, which teed off at Royal Harare Golf Club on Tuesday.