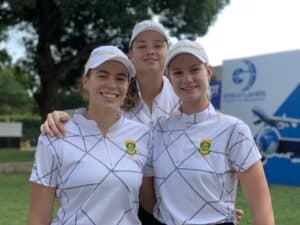 5 September 2022 – GolfRSA has named a powerful team to defend its All Africa Challenge Trophy (AACT) title in Tanzania this week.

The defending champions head to Dar Es Salaam as favourites, with GolfRSA National Squad pair Gabbi Venter and Bobbi Brown, and Bronwyn Doeg looking to secure the country’s 14th title in 15 versions of the popular event.

With the 2020 event, due to be played in Namibia, cancelled due to the COVID-19 pandemic, it has been a long four years since the last African showpiece in Accra, Ghana, where South Africa won the biennial championship by 14 shots. The victorious 2018 team featured Casandra Hall, Lenanda van der Watt and Zethu Myeki, who lost a playoff for individual honours to Tanzania’s Madina Hussein.

Venter, the reigning Nomads SA Girls and St Andrews Junior Ladies Open champion, is the No 1-ranked amateur in the country. The 18-year-old from Free State has been in great form this season and earns her first senior Protea cap.

Doeg has risen to sixth in the national rankings and will also earn her senior national colours for the first time when she tees it up at the Dar Es Salaam Gymkhana Golf Club. The 22-year-old Gauteng North golfer has had an excellent season, finishing outside of the top 10 just once in nine starts.

Brown, ranked seventh, has just returned from France, where she was a part of the South African team that finished 15th in the Espirito Santo Trophy. The former Nomads SA Girls champion’s record on the African continent is excellent, having won the individual competition in the 2022 All Africa Junior Golf Challenge in Egypt earlier this year.

“We have a proud record to maintain,” explained Womens Golf South Africa president Sarah Braude, who accompanied the team to Tanzania.

“Every year we see the competition from African countries improve and with 20 participating nations this year, we won’t be taking anything for granted. We have selected a powerful team in Gabbi, Bronwyn and Bobbi, who will have to be at their best to ensure we lift the trophy at the end of the week.

“Besides the highly anticipated golf tournament, the AACT plays another important role in bringing delegates from the various countries across the continent together to meet and exchange ideas and discuss and plan for driving the growth of girls and women’s golf on the continent.”