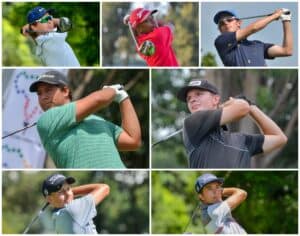 Seven new players have been welcomed into the Men’s National Squad class of 2022, as GolfRSA continues to identify and develop the country’s most promising amateur golfers; credit GolfRSA.

11 April 2022 – Seven new players have been welcomed into the Men’s National Squad class of 2022, as GolfRSA continues to identify and develop the country’s most promising amateur golfers.

The highly successful programme was launched in 2015 through funding from businessman Johann Rupert and provides a platform for talented golfers to further develop their skills and test themselves through local and international competition.

The ultimate aim of the GolfRSA National Squad is to produce stronger national teams and provide individuals with the best preparation to be the best golfers they can be.

“Due to the incredible groundwork laid by the clubs, unions, coaches and academies, there are many highly talented young golfers coming through the system and the depth of talent in this country is remarkable,” explained GolfRSA CEO Grant Hepburn. “We are able to provide funding, support, advice, training camps and, ultimately, playing opportunities at home and abroad as the players progress through the amateur ranks.

“With COVID-19 travel restrictions having been significantly relaxed, we look forward to providing more international playing opportunities to this very talented group of players, including the Squad tour to the United Kingdom in June.”

The Class of 2022 has been divided into three categories, with a group of 10 players making up the Elite section, five players comprising the Senior section and the remaining 13 players from the squad of 28 falling into the Junior category.

Reigning SA Stroke Play champion Jonathan Broomhead has played his way into the Elite Squad after a period of sustained consistency. Not only did he lift the South African Stroke Play Championship title, but he enjoyed a top six finish in the African Amateur and reached the quarter-finals of the SA Amateur during the GolfRSA South African Swing. Such has been the form of the Durban Country Club member this season that he has surged to No 1 on the latest GolfRSA Open Amateur rankings.

The remaining six newcomers fall into the Junior category and have already shown glimpses of their exciting potential.

Aldrich Potgieter, who recently returned to the Southern Cape after spending nine years in Australia, has collected three national junior titles in three months, including the Nomads SA Boys Under-19 Championship double at Royal Cape last month. In the Stroke Play event, the 17-year-old beat his nearest competitor by a staggering 20 shots.

Gauteng’s Pascal Gunther impressed during the SA Amateur Championship, reaching the semi-finals at Royal Johannesburg and Kensington, where he lost to eventual champion Kyle de Beer. Following his national junior debut for South Africa in the African Amateur team competition, the 18-year-old donned the green and gold again to represented South Africa in the recent All Africa Junior Championship in Egypt, where he won the Individual Competition and anchored the SA team in their 29-shot victory.

The other Gauteng-based junior selected is Vuyisane Makama, who has been successful on the union’s local junior circuit. The 16-year-old South African Golf Development Board member finished second last year in his first national appearance in the 2021 Nomads Gowrie Farm Under-15 Challenge and this year took his game to the Open Amateur circuit, where he reached the match play stage in the SA Amateur.

Western Province’s Jack Buchanan not only represented the union with great success last year as a member of the victorious teams in the Premier SA and SA U-19 Inter-Provincials, but the Milnerton golfer racked up two third-place finishes at national junior level this season and has climbed to No 3 in the GolfRSA Under-19 Rankings.

“Dylan Kayne from Boland and Janko van der Merwe from North West are our final two inductees for the Class of 2022,” said Hepburn. “We have been impressed by the consistency of both juniors since last season. Dylan really put up his hand during the SA Stroke Play Championship and African Amateur, where he made the cut in both Open Amateur events, while Janko has put up some great scores on the national junior circuit.

“We witnessed some outstanding performances from our Men’s Squad players during our flagship events as international competition returned to our shores. Several of our squad members also excelled abroad. In the last four weeks, Kieron van Wyk and Cole Stevens both celebrated maiden victories on the US collegiate circuit, Kyle de Beer enjoyed a third place and a runner-up finish in his campaign on the Florida amateur swing and former SA Amateur champion Christiaan Maas tied for fifth in the prestigious Junior Invitational.

“In addition, Christo Lamprecht has been outstanding at No 1 for Georgia Tech, and Tyron Snyders has been formidable for the University of Memphis. We also saw two of our squad graduates Garrick Higgo and Wilco Nienaber excel on the international pro circuit last year. Garrick reeled in two wins on the DP World Tour before his breakthrough on the PGA Tour, while Wilco was victorious on the Challenge Tour. We were extremely proud to see Garrick make his Masters at Augusta National debut this past week and without a doubt, he will inspire many of graduates and members to follow in his shoes.

“Since the inception of the squad, more than 20 squad members have transitioned into the pro ranks and is exciting to welcome seven new golfers into the 2022 squad and to also give them the opportunity to benefit from the squad system to help them fulfil their potential.”