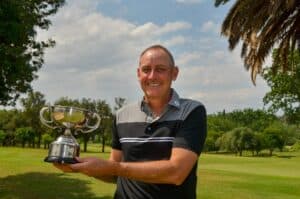 22 October 2021 – Lyall McNeill carded the low round of the day to win the 2021 South African Senior Amateur Championship on debut at Glendower Golf Club on Friday.

The KwaZulu-Natal golfer posted a closing two-under-par 70 to finish at level for the tournament. He was pushed all the way by American Tom Sweigart, who carded his third successive 73 to finish on three-over in second place, three shots behind the maiden winner.

McNeill, who turned 50 in November last year, had three wins and two runner-up finishes in his five starts on the GolfRSA senior circuit.

“It’s been an amazing start and to stand here, holding the SA Senior Amateur trophy is incredible,” McNeill said. “This was the first big tournament I played since I joined the senior circuit and I looked forward to it with some trepidation, but it has just been amazing. I feel very honoured and proud to leave as the champion.

“I am really looking forward to the Coastal Inland Challenge at St Francis Links in December, so hopefully the form, and the back, will last a bit longer.”

McNeill and Sweigart, who is based in Qatar, began the final round tied for the lead on one-over, and the pair both made a nervy bogey start.

“It was pretty bunched at the top of the leaderboard, but as we teed off, the rain dissipated, so we were very lucky with the later start to get the better conditions,” McNeill said. 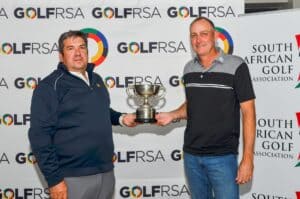 “I started with a bogey but then made five birdies to the turn. Finished that nine in 32 to turn four-under, which was some of the best golf I’ve played in a long time. That gave me quite a lot of breathing space, but then I made two pretty poor bogeys on 10 and 11. I made a good save on 12 and steadied the ship there.”

The field may have missed the rain, but they had to navigate a two-club wind coming home.

“Luckily in Durban it blows a lot, so I can handle myself in the wind. It really was, once I built up that lead, about not making any major mistakes and keeping the ball in play. I made a birdie to counter Tom’s one at the 15th but gave one back on 17.

“They always say no lead is big enough and I had a couple of missed putts there towards the end, but they fortunately didn’t count, and I managed to get it over the line. I enjoyed playing with Tom and Graeme – he is such a tough competitor. He had a bad first nine, but he came back strong.

“This was such a great experience; I loved every moment, and hopefully I will get a lot more of these under the belt.” 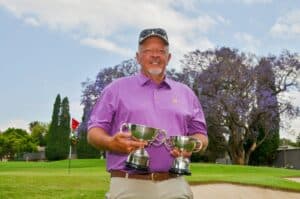 American Tom Sweigart had a memorable first appearance in the 2021 SA Senior Amateur Championship at Glendower Golf Club. The 64-year-old not only finished second, but also lifted the Presidents Trophy (55 plus) and Super Senior Trophy (60 plus; credit Ernest Blignault

Sweigart also overturned the stumbling start with a birdie at the second and he reeled in two more to offset a bogey on the seventh and stay in touch. A double bogey on the 10th set him back once again, but a birdie on the 15th to finish on three-over meant the 64-year-old former Air Force Colonel didn’t leave Glendower empty-handed.

“Cyris Whitney and I came out together and we’ve been here for two weeks. We spent some time in the Kruger, and played Leopard Creek and Gary Player, both of which were a great experience, but this has obviously been the highlight,” Sweigart said.

“Glendower is a great golf course; it’s all the golf course anybody needs. It’s tight, plenty long enough for us old guys, and the club and GolfRSA staff have been wonderful. Everywhere we’ve been, the South Africans have been great hosts and so hospitable. We have had an absolutely wonderful time and we can’t say thank you enough.”

Former SA Mid-Amateur champion Graeme Watson, one off the pace at the start of the final round, had hoped to achieve the rare double. The Ebotse golfer carded 74 and had to settle for a share of fourth on five-over with Rustenburg’s Johan Krugel, who signed for 71.