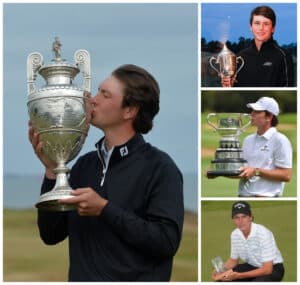 At the completion of the 2021 NCAA Division 1 Men’s Golf Championship Stroke Play competition at the end of May, 15 collegiate golfers punched their tickets to professional golf via the PGA Tour University Rankings.

To be eligible for the PGA Tour University Ranking List, players must compete on the NCAA Division I level and complete a minimum of four years in college. The top 5 gained membership for the Korn Ferry Tour – the PGA Tour’s top level feeder circuit – and players ranked 6 to 15 were awarded membership to the second tier Forme Tour.

Rebula, who graduated Auburn University in May, finished 15th in the rankings and will be making his pro debut next week in the L&J Golf Championship in Atlanta, Georgia from 23-26 June.

“The PGA Tour University Rankings is basically a first draft, designed to assist college players to take the first step into the professional arena. It’s also a wonderful incentive for South African amateurs who choose to take the US Collegiate route,” Hepburn said.

“We are extremely proud of Jovan. He has worked hard over the past four years to balance his academic and golf commitments and has excelled on both levels. He truly deserves this opportunity to take his game to the next level.”

Rebula won the 2018 Amateur Championship and, in the same year, lifted the Freddie Tait Cup as the leading amateur in the South African Open Championship.

During his time with the Auburn Tigers, the 2018 Amateur Championship winner was named to the All-Southeastern Conference (SEC) First Team selection twice.

The Ernie Els and Fancourt Foundation member became only the fifth Tiger in program history to win the SEC Individual title in 2019. Rebula set the Auburn single-season record in 2020 after averaging 70.19 strokes per round and was chosen as a PING All-American Honourable Mention for the third straight season, becoming the third golfer in program history to be a three-time All-American.

Rebula captained the South African team in the 2016 World Amateur Team Championship and represented the country again in Ireland in 2018 but was forced to withdraw after the first round due to injury. The George golfer also represented the International Team in the prestigious Arnold Palmer Cup in 2018 and 2019.

“I am really excited about the future,” said the 23-year-old. “It was a very tough final year with all the disruptions due to the Covid-19 pandemic, but also a great year.

“It’s really tough right out of college to launch into a pro career, and the PGA Tour U programme is a fantastic initiative to get us off the ground. I’m really looking forward to start doing the thing I’ve been working towards my whole life.

“There are a lot of people that helped me to reach this point in my career – my family, GolfRSA, the Ernie Els and Fancourt Foundation, our coach Nick Clinard, my team-mates and the whole team at Auburn Golf – and I am extremely grateful for the guidance and support

“I am very grateful for the opportunities GolfRSA and Mr Rupert created for me personally. Being part of the Elite squad has been an incredible journey. It’s great when you are all the way here in America and you see how GolfRSA keeps on developing, pushing guys through the ranks. It’s very exciting and inspiring.

“I would also like to thank the Ernie Els and Fancourt Foundation for giving me a wonderful foundation and for moulding my values in life and on the golf course. Uncle Hannes (van Niekerk) has been a huge help and a guy I truly admire. He has been a wonderful mentor and played a huge role in how my career and life has evolved.

“I’d also like to thank Auburn University for their help and for everything they have done for me in the last 5 years. It is so hard to describe in words just how much it means to me. I was supposed to be there for four years, but with Covid hitting, we were given a chance to play an extra year and I jumped at it, mainly because of the PGA Tour U Rankings.

“It feels great to have ticked that box. It’s an honour and a privilege to make that Top 15 and I am grateful to Auburn for giving me that opportunity.”

Members competing in the eight-event Forme Tour will earn Official World Golf Ranking points, and the top 5 points earners will graduate to the 2021-22 Korn Ferry Tour.