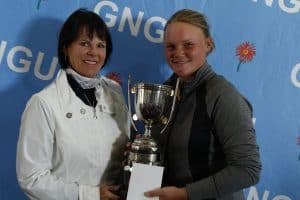 2 July 2018 – Ekurhuleni teen Kiera Floyd validated the value of international experience when she banked her first provincial title with a runaway victory in the Gauteng North Women’s Open on Monday.

The only player to shot a red number on the final day, Floyd’s one-under 71 propelled to the top of the pile in the A-Division at Silver Lakes Country Club. The 13-year-old from Benoni closed out a six shot victory on three-over 219 over Gauteng pair Kaleigh Telfer and Symone Henriques.

Floyd trailed overnight leaders Woo-Ju Son and Kaleigh Telfer by one shot at the start of the final round.

However, the country’s number one ranked Son – coming off a runaway victory in the Nomads SA Girls, blew out of contention with a 10 at the par four fifth – while Auburn University standout Telfer battled to recover from a double bogey start.

Floyd had two birdies and two bogeys in the first five holes, followed by 10 straight pars before a final birdie at 16.

“I holed a six-footer at the third to cancel a bogey start and hit gap-wedge at eight foot at the fourth and made the birdie putt,” said the Ebotse golfer. “I had a good drive at the fifth, but I caught the gap-wedge fat and ended in the bunker. I couldn’t up-and-down to save par.

“At 16, the wind was behind us, right to left. I hit 8-iron and let the wind carry it. The ball finished pin-high left, six foot from the hole. I knew I was leading Kaleigh and Woo-Ju, but I didn’t’ know what the players in front of me was doing, so I played safe over the last two holes.

“When I made the par-putt at 18 people began to clap and smile and that’s when I realised I’d won. It’s been a long time coming and I’m absolutely stoked, especially with the Sanlam SA Women’s Amateur coming up next week at Umhlali.”

The victory marked a watershed moment for the Ekurhuleni teenager, who has been trending towards a win since a top 20 finish in the Joburg Ladies Open on Sunshine Ladies Tour in January.

She hit the headlines in February as the first girl to win an event outright on the 2017/2018 Bridge Fund Manager Junior Series when she beat the boys with an outstanding seven-under-par 65 at the East Course at Royal Johannesburg and Kensington.

A month later, she featured in the Nomads SA Girls Rose Bowl at Royal Cape and she was in the mix on the last day of the Sanlam SA Women’s Stroke Play in April. A final round 76 saw her walk away from the showstopper at Port Elizabeth Golf Club with a top five finish.

However, the penny dropped when she represented GolfRSA at the Himbara World Junior Golf Championships in Indonesia last month, where she finished fourth overall in Girls B-Division for 13 to 14 year olds at Damai Indah Golf.

“The Pantal Indah Kapuk course was incredibly challenging,” said the Grant Veenstra Junior Golf Academy player. “After the first round I was deflated. I aimed for five or six under and shot 75.

“Sarah Braude (vice-president of Womens Golf South Africa) told us that we were setting our expectations too high. She told us par was a great score and we should set realistic targets. So I adjusted my mind-set. I’ve always been an impatient golfer and I got very upset if I made bogeys.

“For the rest of the tournament I kept my cool and I stayed in the moment. And that’s exactly what I did today to win the Gauteng North Women’s Open. I never understood what people meant when they said that international competition gives you experience. The trip to Indonesia really pushed me to my limits, but I did learn and it helped me to mature into a better golfer.” 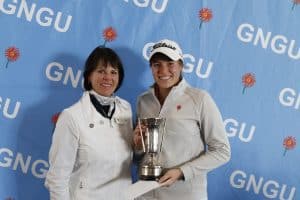 Bronwyn Doeg carded rounds of 92, 93 and 91 to win the B-Division in a count-out against Valda Ford and Dianne Dyason took the Stableford Bronze Championship title with 64 points.