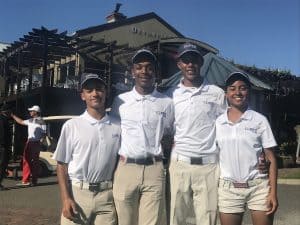 Curro Aurora made an excellent start to their title defence in the eighth SA High School Championships and leads the field at Devonvale Golf and Wine Estate; credit GolfRSA.

2 August 2018 – Curro Aurora picked up where they left off last year and set the first round pace in the eighth South African High School Championship on Thursday.

Mwale anchored the team with a three-under 69. His effort was well supported by Stevens and Van Wyk, who contributed respective rounds of 70 and 72. The fourth member of the team, Cara Ford, returned a non-counting 79.

Last year, Curro Aurora held off a strong challenge from Glenwood House to win by one shot victory at Randpark Golf Club and the defending champions are bound to come under pressure again in Friday’s final round, with at least three teams in close pursuit.

The Golf School of Excellence finished in third on 215, courtesy of a 70 from Brendan Porter, even-par 72 from Titouan Berny and a 73 from Benji Stein.

Nienaber, who claimed the Individual title last year by eight strokes, threw down the gauntlet with a blistering start and finish.

He was four under through the first three holes after a birdie-eagle-birdie start and signed off with an eagle at 17 and birdie at 18. An opening eight-under 64 will see the matriculant start the final round with a four shot lead over Maas and Mwale.