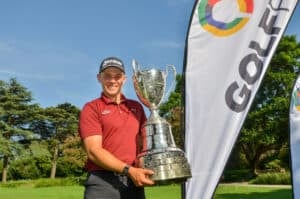 16 October 2022 – South Africa’s top-five ranked amateurs on the GolfRSA Open Amateur Ranking will tee it up alongside their professional counterparts in the Investec South African Open Championship at Blair Atholl Golf Estate from 1-4 December 2022.

“As the custodians of the world’s second oldest Open, we are extremely pleased to offer our leading five amateurs the opportunity to test themselves in a championship of this stature.

“We are incredibly fortunate that we have a great depth of choice amongst our elite amateur golfers in South Africa and we implore these fine young golfers to grab this opportunity with both hands, and to use it to further enhance their careers.”

The Investec SA Open is co-sanctioned by the DP World Tour and the Sunshine Tour and boasts a purse of R17.5 million.

While the professionals battle it out for the lion’s share of the prizemoney, the amateur crew will compete for the coveted Freddie Tait Cup, awarded to the leading amateur at the end of the 72-hole championship.

De Beer, a member of the Ernie Els & Fancourt Foundation, automatically gained a spot as the winner of this year’s SA Amateur Championship. The Port Elizabeth golfer will go into the event high on confidence after recently capturing the Ekurhuleni Open by three strokes.

“Playing against the country’s top professionals is a great way to measure yourself,” he explained. “I am incredibly grateful for this opportunity. We all want to turn professional in the near future, so it’s about gaining as much experience as we can before we make the leap.” 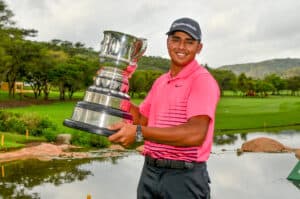 Yurav Premlall – the youngest amateur at 15 years and five months to qualify for, and make the cut in the SA Open – lifted the coveted Freddie Tait Cup as the leading amateur in his fourth start in the 2021 edition at Sun City; credit GolfRSA.

The Glendower golfer was only 15 years old when he played his first SA Open, becoming the youngest player to qualify for, and make the cut in the world’s second oldest Open. Last year Premlall prevailed at the Gary Player Country Club, holding the Freddie Tait Cup aloft next to the 2021 SA Open champion Danie van Tonder.

“Thank you to South African Golf Association for the invitation to play in the Investec SA Open. It’s always an honour to play in your national open,” he said. “Last year I achieved my goal of being the low amateur and this year I want to not only retain the award but try for a top-20 finish as well.”

Maas competed in the last two editions at Sun City, but it will be a debut performance at Blair Atholl for Broomhead and Potgieter.

GolfRSA CEO Grant Hepburn said that the Investec SA Open presents a wonderful opportunity for these players to learn from competing alongside the best.

“We all know that our top amateurs have the raw talent to make it in the professional game,” he said. “But they need to get a grasp of just how much of a step up it is, both in terms of the quality of golf played and the mental strength required.

“We are extremely proud of the fact that all five amateurs selected by the South African Golf Association are members of the GolfRSA National Squad. They have all worked extremely hard and achieved excellent results throughout the year, both locally and internationally.

“We have been so impressed by their commitment to improve and their eagerness to learn and they are all very deserving of the opportunity to tee it up in the Investec SA Open.”

Dates and venues for the qualifying tournaments will be released in due course.