WP win magnificently while KZN win promotion to A Section

Overnight rain and wind settled the outcome of the South African Inter Provincial golf tournament at the Hermanus Golf Club, with Western Province in the A section and KwaZulu-Natal in the B section the pole-sitters after the fourth day.

Neither was likely to be unseated from their perches atop the logs, but there was at least a mathematical chance that Eastern Province could have hammered KwaZulu Natal 9-3 or better and triumphed in the B section.

In the event, the usual morning foursomes were called off as staff battled to dry water-logged fairways and greens, and that remote possibility then became subject to a 7-1 margin in the remaining singles.

But Eastern Province managed to hold the new B section champions to 4-4, meaning the margin of victory was maintained for KwaZulu-Natal, and they march into the A section for next year’s event which they host at Durban Country Club.

Western Province was even more secure: Boland needed to trounce Gauteng North by 10 points and Free State and Northern Cape had to restrict Province to one point or less.

With Western Province sporting three players at the head of the “most valued player” list going into the final round – Adrian Ford, Francois Olivier and Aaron Russell were undefeated in singles play – it was a tall task for the up-country team in the squally conditions which so suited the coastal players.

And so it was, as Western Province steamrolled past a hapless Free State and Northern Cape combination, winning 8-0.

“We wanted five wins in five matches, and we got it. It was an awesome performance by the boys,” said Province skipper Werner Theart. “We had three guys who were undefeated in singles, and that’s just great.”

It was a performance which had a neat little underlining given it by Gregg
Upton: He got a hole-in-one on the ninth – the only one of the tournament.

It was Western Province’s first title since 2004, and they secured it with their 7 ½ – 4 ½ win over Boland on the fourth day, extending their unbeaten run to 10 years over their neighbours in the tournament. 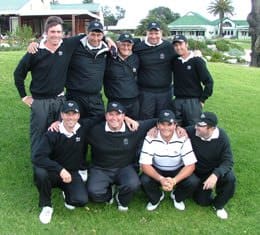 Boland rounded off a spirited defence of their title with a 4 ½ – 3 ½ victory over Gauteng North, and the loss sent the Pretoria boys down to fourth below their neighbours Central Gauteng.

They managed a 5-3 win over Ekurhuleni, and that defeat will send Ekurhuleni down to the B section next year.
Border managed to lift itself up to third on the B section log with a 4 ½
– 3 ½ win over North West, finishing behind KwaZulu Natal and Eastern Province.

Limpopo got its second win of the week, at the expense of Mpumalanga’s fifth defeat. The margin was 6-2. It means Southern Cape will have to travel to Mpumalanga to play the hosts in an attempt to get into the B section for next year.