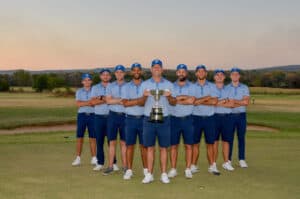 The team from the Cape ended the week with a perfect record by defeating the old foe Central Gauteng 7.5 – 4.5 in the final round, successfully defending the title they won at San Lameer last year.

“I’m so proud of the team,” said Western Province Golf President Mike de Swardt. “We knew going to Koro Creek as the defending champions would add extra pressure, but from the first session on day one the guys were calm and in control.

“The mark of a champion team is playing the clutch moments well, and our players executed incredibly well under pressure. Kudas to the team and their manager Cameron Johnston on their successful campaign. They did themselves and Western Province Golf proud, on and off the course.”

Province began with a closely-fought 7 – 5 win over newly promoted Eastern Province, having trailed 2.5 – 1.5 after the morning foursomes.

The Cape side edged Gauteng North 7.5 – 4.5 in the second round, comfortably beat Ekurhuleni 9 – 3 in round three, but were made to fight for their fourth-round win over North West. “We pulled that one through 7 – 5 to move to eight points in the standings, two points clear of Central Gauteng,” said Johnstone. “We came into the final round knowing that we needed a least to halve the tie to retain the cup.” 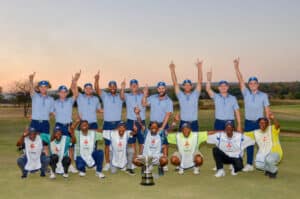 Province laid a solid foundation in the foursomes to secure a 3.5 – 0.5 lead, but Central rallied early in the singles to win two games and close the gap.

Sean Howell birdied the 16th and 17th holes to secure Province’s first point of the afternoon session. Jack Buchanan halved the 17th and won 1-up on the last hole, which meant the defending champions had 5.5 points in the bag. Andrew Georgiou then won 3 & 2 and Phil Taberer came through at No 1 on the last to secure the win.

“We had three rookies in the team this year, and they equipped themselves brilliantly, which is a nod to the great team culture and the attitudes of the more experienced guys. It’s a credit to each and every member of the team that they went out there and did the job, against our historically biggest rival, Central Gauteng. We are not a team of superstars, but every player fought for the team and our captain Andrew Georgiou once again did an impeccable job of leading the team.” 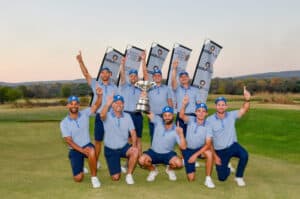 Province captain Georgiou, a 4-time All American on the collegiate circuit and former Sunshine Tour player  regained his amateur status in 2021. He explained that his return to amateur golf has been far more satisfying than expected, primarily due to the incredible team environment the amateur circuit in South Africa provides.

“I have to say it’s awesome to be able to ‘give back’ and I thought that winning IPT last year felt good but, man, this one might feel better,” he explained. “To come here under the pressure of being the defending champions, playing an inland golf course and having three rookies on the team, this one means the world to us.”

Central Gauteng, who could have claimed the title if they had beaten Province comprehensively on the final day, finished in second position on the log, with newcomers Eastern Province in third.

Ekurhuleni finished in fourth, leaving Gauteng North and North West to battle out to avoid relegation.

In the end it came down to a games count-out, with North West edging the Daisies for the fifth spot by 4.5 games points. Gauteng North tee it up in the B-Section next year, with Free State having secured promotion to the A Section for the first time since 2018.