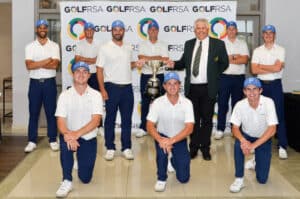 17 September 2021 – Western Province was in ascendancy again in the 60th SA Inter-Provincial Tournament after mowing down Gauteng North in a pressure packed final round to lift the A-Section title at San Lameer Country Club.

Not many outside the Western Province camp believed two bankers and six rookies could pull it off, but the newly crowned champions proved yet again that golf is played on grass, not on paper.

Western Province were made to work for their first-round victory, but they managed to edge Southern Cape 6.5 – 5.5 to bank their first 2 points. Over the next two days, the side beat Central Gauteng and Ekurhuleni 8 – 4 and had the opportunity to win it on day four. However, North West stormed out of the gates and handed Province an 8.5 – 3.5 hiding.

“We lost badly, but we did what Western Province does best. We knuckled down, got our team spirit fired up and came out fighting in the final round,” said team manager Cameron Johnston.

Province carried the momentum of three foursomes wins into the afternoon session and their total kept escalating. 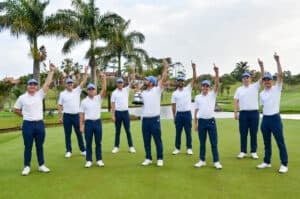 “Ayden (Senger) halved against Armand van Dyk and Sean (Cronje) edged Francois van der Walt 1-up,” said Johnston. “This win has been a long time coming since we shared the trophy with Boland in Port Elizabeth in 2012 and I couldn’t be more proud of this team.

“The guys played some exceptional golf in really tough conditions, especially in the singles. The boys really manned up and took the fight to Gauteng North. The Daisies never backed down but taking 3 wins in the foursomes and Shaun and Jack winning at 7 and 8 really fired up the rest of the squad. The guys stepped up to pull it through. It was their never-say-die attitudes that won the day for us.

“We are overjoyed to be back in the winner’s circle, and we would like to extend our gratitude to everyone at Western Province Golf for setting us up and backing us all the way.”

Georgiou was overjoyed to celebrate victory with his charges in his first premier SA IPT.

“I am beyond words,” said the delighted skipper. “When Cameron asked me to captain the team two weeks ago, I felt so privileged.

“We had the unique opportunity to win the Inter-Prov on Thursday, but North West came out firing in the sweeping rain. They put us back in our place, but that caused us to really bond last night, and we came out today determined to pull it through. I am incredibly proud of all the boys and to leave here as the champions is awesome.

“I want to say thank you to everyone at San Lameer on behalf of all the teams. What an awesome match play course. Anyone who hasn’t played here, should put it on their bucket list. And a big thanks to the greenkeeper and the course staff and the GolfRSA staff for all your hard work, especially in tough conditions the last two rounds.”

North West went into the final round tied for the top spot in the log, but the 2019 B-Section winners were unable to find the highest gear on the final day.

Central Gauteng dominated the match to win 7.5 – 4.5 and leapfrogged into second with 7 points, leaving North West to ponder the ‘’what ifs’’ after taking third on 6 points. Gauteng North finished in fourth.

In the do-or-die battle to avoid the wooden spoon, Southern Cape drew the short straw. In a commanding performance reminiscent of their 2019 victory, Ekurhuleni sent the Garden Route down with an 8.5 – 3.5 result.

The Durbanville golfer won four of his singles games and halved one and partnered Georgio to 4 wins in the foursomes. The Western Province skipper was a close second on 8 points, alongside Tyron Taylor from Gauteng North and Central Gauteng’s Wendell Bossenger.