25 April 2018 – Central Gauteng claimed a resounding victory over Gauteng North to strengthen their position at the top of the SA Senior A Inter-Provincial standings at St Francis Links on Wednesday, but with Mpumalanga in pursuit of Border, the B-Division battle for promotion is going down to the wire at Pecanwood Golf and Country Club.

The Central Gauteng Seniors enjoyed another profitable day in the Eastern Province, routing Gauteng North 9 – 3 to keep their unbeaten run alive. The defending champions – gunning for a hat-trick of titles – have 10 points in hand, but an all-holds-barred three-way clash against Western Province and Ekurhuleni is on the cards for the last day.

Western Province drew against Southern Cape in the first round, but the former five-time champions are still very much in the fight after four successive victories.

Province moved to second in the standings with nine points after defeating North West 7.5 – 4.5 and edging out KwaZulu-Natal 6.5 – 5.5. Central Gauteng has a huge advantage with 43 games points, though, which means Western Province must come out guns blazing if they hope to overcome the 9.5 point deficit to visit the winner’s circle again.

With the match between Southern Cape and Ekurhuleni also ending in a draw, Eastern Province climbed to third with seven points. They play North West in the final round.

KwaZulu-Natal, Gauteng North and Southern Cape all have four points, but KwaZulu-Natal – who mowed down North West 10 – 2 – leapfrogged both teams for fourth with 35.5 games points.

The fight to avoid relegation will be between North West and Ekurhuleni. Both teams have two points, but North West, with 24 games points, leads Ekurhuleni by 9.5 points.

The log leaders will face off in the final round and, with one round to go and the stakes are high – promotion is on the line, it’s all to play for.

Free State and Northern Cape meet Limpopo in the other three-way clash.

A-DIVISION SUPER SENIORS
Gauteng North will carry a slender one point advantage over Southern Cape into the final round after beating Central Gauteng 4 – 2. The Daisies have six points and 13 games points in hand, but will need to beat Southern Cape and Ekurhuleni to finish ahead of their closest pursuers.

The Garden Route Seniors edged out Western Province 3.5 – 2.5 to push their tally to five, but they lag 2.5 games points behind the log leaders. Central Gauteng, facing Western Province and KwaZulu-Natal in the final round, is third on three points. 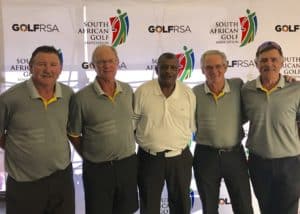 While their Senior side battles for the coveted promotion, the Boland Super Seniors side will need also one last hoorah to win the title.

The side has four points, but Border, North West, Free State and Eastern Province all have two points and will be in hot pursuit on the last day.