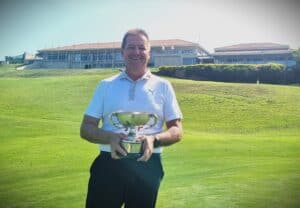 22 October 2022 – Western Province golfer Greg Woodbridge produced the round of his life on the final day of the South African Senior Amateur Championship to claim his first national title on the GolfRSA Senior circuit in October.

The 54-year-old was confidence and poise personified as he pulled away from the chasing pack at East London Golf Club to seal a four-shot victory on two-under-par 217.

“This is absolutely fantastic. It’s been a goal to win the SA Senior Amateur since I transitioned to the senior ranks four years ago, and this is truly a dream come true. I’m very proud of this,” Woodbridge said.

Woodbridge didn’t make the best of starts with an opening three-over-par 76 leaving him six shots off the pace in a tie for 21st.

Royal Cape’s Henry Trevena edged into pole position on two-under with a second round 73, but the 2022 champion produced the low round of the day in the challenging conditions – a flawless two-under 71 – to get within three shots of the leader.

After two days of battling the elements, the final day dawned with near-perfect conditions and Woodbridge made the perfect start with birdies on the uphill par-five opening hole and the par-five third to put himself in serious contention. 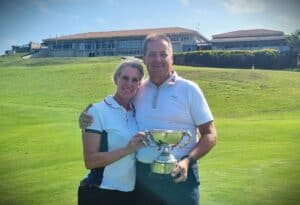 The Atlantic Beach Links senior turned two-under and with the wind showing up again over the last nine holes, he offset a couple of dropped shots with further gains on the 11th, 13th and 14th holes to keep daylight between himself and the chasing pack.

“It’s an amazing golf course,” the champion said. “People who haven’t played East London should really put it on their list. It’s really an amazing course.”

Woodbridge, the only player to finish in the red numbers, said he prepared well for the event and being able to adjust to the conditions was a major factor in his performance.

“I felt very at home here. It’s very similar to what I play at home, with all the undulations and the wind, An absolute test. I believe it was an added benefit that I play at Atlantic Beach, where it almost always blows, and I think that was key to my win.

“The wind came from different directions on all three days, so you had to make a lot of adjustments because you never played the holes the same way. I did a lot of prep with my mates at Atlantic Beach for about four weeks before the tournament, and that definitely paid off.”

And Woodbridge acknowledged his other secret weapon, saying “Having my wife Candice on the bag this week was really great. Candice is a great golfer herself. She talked to me the whole time, and just kept me focussed on the job. It’s great to celebrate this milestone with her.”

Last year’s winner McNeil had to settle for second on his own after closing with a 76 to finish on two-over.

Wessels fired a final round 73 which was good enough for third on his own.

Finishing on three-over-par 222, the 60-year-old Gauteng North golfer edged out Trevena from Western Province by two shots to lift the Super Senior title.