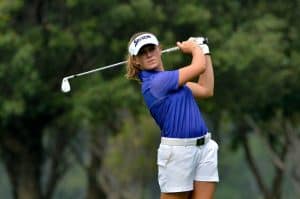 10 August – South Africa’s top ranked Caitlyn Macnab has been making her mark in the South African golfing landscape over the last 18 months and deservedly, the 18-year-old recently made the shortlist of finalists in the 2020 Momentum gsport Awards.

Only a handful of women have won Womens Golf South Africa’s flagship events in the same calendar year and the petite Ekurhuleni powerhouse underlined her rising star status when she achieved this rare feat with her double victories in the Aon South African Stroke Play and Match Championship titles in February.

The GolfRSA Elite Squad golfer has not reeled in victories to dominate the GolfRSA Open and Junior Rankings since the end of 2018, but she represented the country with pride in several top international events.

Late last year, Macnab captained the South African women’s team to a tie for second in the prestigious Astor Trophy in Canada, which marked the country’s best result yet in the quadrennial showpiece between Australia, New Zealand, Great Britain, Canada and South Africa.

Lonwabo Nkohla and Celine Abrahams from gsport chatted to the 2020 Emerging Athlete finalist about her career, her dreams and her long term goals for the future.

A finalist in the Emerging athlete of the Year category, Congratulations! What does this recognition mean to you?
I’m extremely humbled and grateful to be nominated as a finalist in a field of such excellent women in sport. It’s an amazing opportunity and something I am very proud of.

You are representing GolfRSA alongside the Womens Golf South Africa President Sarah Braude in the Momentum gsport15 awards, who described you as a dominant force in golf. How does that make you feel?
It makes me feel extremely proud! It proves just how the hard work, countless hours and sacrifices that I, as well as the team behind me have made, are starting to pay dividends. It also proves the great work that GolfRSA and Womens Golf SA have made in laying the great foundation they have in order for me to preform and play the game that I love.

What do you think of the current state of women’s golf in the country?
I definitely think that SA has a very high standard of players. I do however, believe that women’s golf in SA could grow in leaps and bounds if we held tournaments where overseas players could come and test their skills on some of our beautiful courses up against our own field of players. This will give all our players who haven’t yet had the opportunity to travel the awesome experience and exposure to play and learn from international players.

As a sportswoman that has represented her country on big stages across the globe, what would you like to see change in how society supports women in sport?
One thing I have noticed from traveling is that the top competing countries have a lot of support and sponsorship directed towards women’s sport. Although there has been a massive growth in women’s sport in SA, I still feel that there is a clear separation between the men and women. It is going to take time, but awards such as these, supported by Momentum and gsport will hugely help in growing women’s sport in the future.

Tell us more about the work you do to assist younger players?
It is extremely important to give back and help grow the game as much as possible. I volunteer my time to help at clinics for girls and underprivileged juniors as well as at fundraisers to share my love and young knowledge of the game. Golf is an incredible sport that can be played by all walks of life, and I find it extremely important to show people just how fun it can be.

You are so young with such an impressive list of achievements. What do you attribute your success to?
I have been extremely fortunate to have had incredible opportunities afforded to me by GolfRSA, Womens Golf South Africa and Ekurhuleni Women’s Golf and I have a great support system behind me, including the golf bodies, my family and friends, my coach. They have all played a huge role in my success thus far and I wouldn’t be here without them.

Nothing comes easy and I have had to be extremely dedicated and hard working to push through the tough times. My positivity, drive and will to succeed are what have gotten me this far and I am extremely excited to see what the future holds.

You had a blistering start to 2020 winning the Aon South African Stroke Play Championship on your 18th birthday and Amateur Championships – a rare feat to be reached in the same calendar year. How did you feel about this milestone?
The fact that the championship fell over the week of my 18th birthday was out of this world, and being able to share the incredible moments with all my friends and family really made it a special week that I will always remember.

Winning both the Aon SA Stroke Play and Match Play titles has been a dream of mine since I started playing golf. Winning them both in the same year is honestly a dream come true!

Do you feel any pressure being South Africa’s top-ranked amateur golfer?
Although there is definitely a lot of expectation from everyone for me to constantly perform, I am the only one who can make the results happen at the end of the day. There is no need for me to put any added pressure on myself, so I just try stay as positive as I can, stick to my routines and play the game that I love.

When you first started out in golf, did you think you would have achieved the kind of success that you have so rapidly?
My parents have always told me that I can achieve whatever I wanted to if I worked hard enough for it. I have had to make a lot of sacrifices and I have worked my butt off to get to where I am today, but I wouldn’t be here without the continuous love and support from of my team, friends and family who are behind me.

Any success story – even those in the making still – will have their hurdles. What has been your most challenging to get over?
I would definitely say that trying to balance school with the golf has been the most challenging. I am constantly travelling for different events, so I’ve had to be very devoted and dedicated in order to stay on top of all the schoolwork and not let my marks slip.

Which female golfers inspire you and why?
I honestly have so many names but I definitely say Annika Sörenstam. She is known to be the greatest women golfer of all the time, and has been a huge influence in developing the game into what it is today. She also has her own junior foundation and is extremely generous in giving as much back to the game that she possibly can.

Another big name would be Ashleigh Buhai. She is from South Africa and I’ve looked up to her since I started playing.

There’s no denying that you’ve done extremely well. What else is on your goals list and what is your greatest sporting ambition?
My ultimate goal is to play on the LPGA Tour and become the #1 player in the world. I also want to give as much back to the game as possible, and provide juniors the opportunity to pursue the sport that they love.