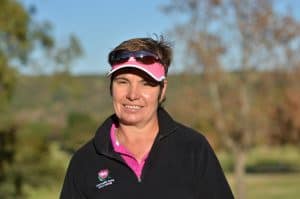 Having played the course blind after a nine hour car-trip from George, the Southern Cape golfer took command from the word go and staved off former champion Vanessa Smith from Western Province, Adele Beytell and Karin Watts from Gauteng North and Desiree Earle from Limpopo to go wire-to-wire at Kimberley Golf Club.

Winter, who won her first two titles back-to-back at Kingswood in 2011 and 2012, arrived for the 2018 edition at Krugersdorp Golf Club from 5 – 7 November having won the Southern Cape Mid-Amateur at Goose Valley, but she is taking nothing for granted.

“It’s a relatively small field, but there are many experienced players, so I will have my job cut out to win it a fifth time,” said the Kingswood golfer.

“Vanessa has won it twice before and has had many wins in her career, including the recent Western Province Women’s Mid-Amateur in July and the Boland Mid-Amateur in August. Sonja (Bland) is another definite contender and a former champion, who has played many competitive rounds abroad in the last few years.

“Liezel Smit is another a solid player. She recently returned to competitive golf with her daughters that are also playing competitively now and she is known to score consistently. Karin and Adele can never be discounted, either.”

Last year’s runner-up Earle, who won the Gauteng Mid-Amateur at Ruimsig, is the only winner this season not teeing it up at Krugersdorp Golf Club this week.

“It should be a tight competition this year,” Winter said. “I’m happy that I managed to get here early enough for a practice round. I have never played Krugersdorp before. It’s a very interesting layout with many doglegs. Driver is often not the club to play off the tee, so course management and accuracy will play a big role. It is however a score-able course, if you manage your game well.

“The course is in very good condition, lush and well-manicured. We are very grateful to the lady members, who were very helpful and accommodating, allowing us to play in their ladies competition on Saturday to see the course and sharing their local knowledge with us.

“I am looking forward to the tournament and competing again. I’ve always loved this event and the opportunity to compete with golfing friends that I’ve met over many years.”

Smith went wire-to-wire in the 2013 edition at Irene Country Club and defended her title the following year at St Francis Links, although the event had to be reduced to 36 holes due to unplayable weather conditions.

Other players to watch this week are Lynne Behagg from Boland and Gauteng’s Valda Ford.

Behagg from Hermanus tied for third in the Goose Valley event and had a top 10 finish in the Western Province Women’s Mid-Amateur. Randpark’s Ford had top four finishes in the Gauteng, Gauteng North and Limpopo events, tied for 14th in the Southern Cape tournament and finished 11 in the Boland event at Stellenbosch Golf Club.

The Senior Championship will be played concurrently with the mid-amateur competition.