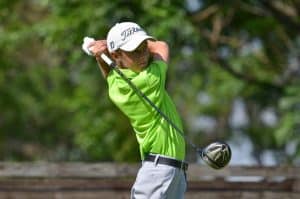 26 March 2019 – Jonathan Wilsenach from Ekurhuleni has a golden opportunity to close out his first national victory on the GolfRSA junior circuit after taking the lead in the Gowrie SA Under-15 Challenge in Tuesday’s second round.

The Kempton Park golfer overcame a six shot overnight deficit with one-under-par 70 at Gowrie Farm Golf Estate to open up a two-shot lead on two-over 144 over his closest pursuers.

In a rock solid performance, the Kempton Park golfer mixed 15 pars with birdies at seven and 10 and a bogey at the par three 15th.

Luc Gavagnin set the first target at three-under, but slipped to a four-way tie for second after carding disappointing 78.

The Pecanwood junior overturned a double bogey and three dropped shots to get back to level par playing the last. He made a double bogey at the 18th, but was subsequently penalised two shots for not replacing his ball-marker on the final green after he had moved it for his playing partner.

An expensive nine at the par five cost Gavagnin a share of the lead and he will start the final round alongside Kael Kurt Strydom, Ethan Govender and Jordan Wessels. Central Gauteng’s Strydom posted 72, Govender from KwaZulu-Natal shot successive rounds of 73 and Wessels from North West returned a 76.

“Conditions in round one was breezy but warm, but today the field teed off in a light drizzle and it stayed quite cool,” said tournament director David Younge from GolfRSA. “The weather cleared up somewhat but the last starters also got underway in the rain.

“It’s encouraging to see that once again, the cream has risen to the top. Most of our top ranked juniors have played their way into the top 15 and we should have an exciting final round contest. Jonathan has been rock solid over the first two days, though, and the chasing pack will have to make an early move to put some pressure on him.”