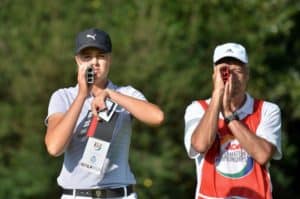 17 February 2020 – Kaylah Williams hopes to emulate fellow Western Province golfer Sam Simpson when she bids for the number one spot in the Aon South African Women’s Amateur Championship, which tees off at Royal Johannesburg and Kensington Golf Club on Tuesday.

Simpson was the proud recipient of the prestigious Proudfoot Trophy for his three-shot victory on 13-under in the 36-hole qualifying event for the Aon SA Amateur Championship on Monday.

Williams will have the chance to do the same after she took pole position in the 54-hole Aon South African Women’s Stroke Play Championship with successive rounds of two-under-par 70.

The Durbanville golfer carded an opening 70 on the commanding East Course and signed for the same number on the West Course.

She will carry a slender lead on four-under into Tuesday’s final round on the West Course, with South Africa’s leading amateur Caitlyn Macnab and Larissa du Preez threatening at three-under-par 141.

Williams tied for sixth in last year’s SA Stroke Play and went all the way to the final in the match play event, where she lost at the 20th hole to Kajal Mistry, who became the 12th player to clinch a calendar double since former Major champion Sally Little’s feat in 1969.

“The final result tomorrow will determine the seeding for the Aon SA Women’s Amateur Championship, which starts on Wednesday. I would love nothing more than to put my name in the number one slot. The leaderboard is very tight, though, so let’s not start counting chickens just yet,” said the 17-year-old Durbanville resident. 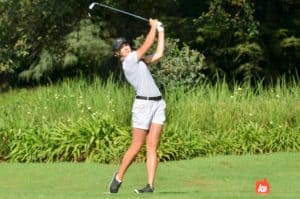 “I really enjoy the West Course, because the fairways are more generous and it’s a bit shorter than the East. You can take driver with some confidence to leave yourself shorter distances in, and you can fire at the pins.

“My strategy will be to get a bit more aggressive off the tees and definitely more aggressive with the putter. I burned some edges today and left a couple in the throat, and if those had dropped, my lead could have been a bit more substantial.”

Macnab, who held the overnight lead on three-under, turned three over after a double bogey start at the par four 10th and a bogey on 18, but she started the inward loop with successive birdies and a third gain on the par five ninth brought her back to level.

Du Preez had three bogeys, but the Ernie Els and Fancourt Foundation member produced double the number of birdies to grab a share of second.

The 13-year-old’s rounds of 84 and 81 lifted her three shots clear on 21-over, with Bacaus from Umkomaas second and Kruger from Country Club Johannesburg in third on 26-over.