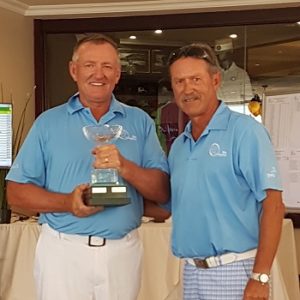 11 February 2018 – Steve Williams became the first golfer to lift both flagship trophies on the South African senior amateur circuit when he won the Senior Players Championship at Sun City in a dramatic finish on Sunday.

“I’m incredibly proud to put my name on this trophy,” said Williams, the number one ranked senior in South Africa. “Only the top 50 seniors in the rankings qualify for this championship and we fight for 12 months to secure a start in the field. Arriving here, you know it’s going to be a dog-fight, because you’re up against the best in the country.

“This was the first time I played in the Senior Players Championship, and to walk off the Gary Player Country Club course is extremely special. No matter what tee you stand on, this track is so tight, the bunkers and hazards are huge obstacles and this course nails you for the slightest miss-hit. This rates right up there with the best highlights of my career.”

Williams was the odds-on favourite coming off back-to-back victories in the Central Gauteng Senior Open and Gauteng North Senior Open.

However, the country’s number one ranked senior found himself with company after an opening one-over-par 73 at the Gary Player Country Club.

Starting the final round in a four-way tie for the lead with Phillips from KwaZulu-Natal, fellow Central Gauteng golfer Stephen Johnston and Derik Piek from Gauteng North, the 56-year-old birdied the opening hole to break clear of the four-way tie, but let the pack back in the door with three successive bogeys from the second.

Another bogey at eight saw Williams turn three-over and he trailed Phillips, who bogeyed three and eight, by one shot.

“I was hitting the ball so well, but the putter was stone cold on the front nine,” said Williams. “Morgan was so steady, making par after par. I had to get the birdie putts to drop if I wanted to catch him.”

Suddenly the short stick caught fire and Williams produced a trio of birdies from the 10th.

“I hit my tee shot left at the 10th, but I hacked it back into the fairway with an 8-iron, hit a sand-wedge to 10 feet and holed the putt for the birdie at got me going,” said the Modderfontein golfer. “At 11, I hit a good 3-wood and holed another 10-footer and at the 12th, I hit 8-iron to five feet and boxed the birdie putt.”

A fourth gain at 14 pushed him into pole position. “I went the conservative route at 14. I hit 5-wood, 4-iron and holed another 10-footer for birdie,” he said. “But the lead was brief, because Morgan birdied 15 to level the score at one-under.”

He had a couple of chances over the last three holes to pull clear of Phillips, but a five-footer for birdie stayed out at 17 and a 20-footer to clinch the title stopped just short of the hole. Phillips missed his chance to force a play-off when his par-putt at 18 refused to go the distance.

“I took nothing for granted over the back nine,” said Williams. “The putter came alive, and once I had a foot in the door, I just played for pars. The way Morgan was playing, I couldn’t afford a bogey.”

Williams was delighted to add his name to the past champions list that feature Phillips, Peter van Coller, Lynton Beckett, Ben Kleynhans and Andre van Dyk.

“I have to congratulate Phillip (Viljoen),” said Williams. “This tournament definitely lived up to its billing as one of the best on the senior amateur circuit and it’s a real honour to have ticked this box.

“The support from the sponsors, PricewaterhouseCoopers and Super Group Dealerships, was absolutely amazing. This tournament this rates right up there with some of the international events I’ve campaigned in. And to have all the wives and partners here at Sun City to share the experience made a memorable experience even more special. I look forward to coming back next year to defend my title. Who knows, I might even become the first back-to-back champion in 2019.”