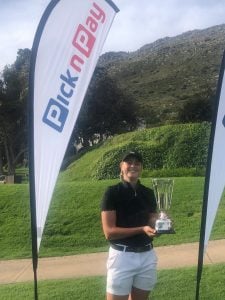 GolfRSA Elite Squad member Kaylah Williams lifted the Gus Ackerman Trophy for a second time in four years when she won the Championship Division of the prestigious Ackerman Championship with a seven-shot victory at Clovelly Country Club; credit WPWG.

October 2020 – Durbanville golfer Kaylah Williams put the perfect exclamation mark on her final competitive appearance for the 2020 season with a masterful victory in the prestigious Ackerman Championship on Sunday.

The 18-year-old fashioned a blistering closing loop of 31 featuring an eagle and four birdies in the final round at Clovelly Country Club to win by seven shots from Ekurhuleni’s Nadia van der Westhuizen.

Her six-under-par 210 triumph marked a welcome return to the winner’s circle for the GolfRSA Elite Squad member since her Pro Shop Gauteng Open victory in May last year.

“It feels absolutely fantastic to lift a trophy again, especially in my last ranking event for the season,” said Williams. “With the matric finals just around the corner, this was my last event and I really, really wanted to finish the season on a high note. I am extremely proud to have done just that.”

The Fairmont scholar was only 14 when she lifted the sought-after Gus Ackerman Trophy for the first time, but she was just as thrilled the second time around to add her name to a winner’s list that includes SA Golf Hall of Famers Wendy Warrington and Gilly Tebbutt, Ladies European Tour winner Ashleigh Buhai, Sunshine Ladies Tour champions Bertine Strauss, Nobuhle Dlamini and Carrie Park and former SA Women’s Match Play champion Cara Gorlei.

“It’s a huge honour to put my name on this list twice, because the Ackerman Championship is one of the oldest and most esteemed events on the Western Province Golf calendar and one of those events that has gained huge national support,” Williams said.

“We are so grateful to the Ackerman family and Pick ‘n Pay for sponsoring the Ackerman Championship for the last 40 years and for their continued support of amateur golf in the Western Province.

“I also owe a big debt of gratitude to Womens Golf Western Province for pulling me into their High Performance Squad, Womens Golf South Africa for all the opportunities they have given me through the GolfRSA Elite Squad and my family and coach for always having my back. It’s a great feeling to pay back all the trust and energy that they have all invested in me.”

Williams had reached the number two spot in the Womens Golf South Africa Open Amateur rankings when she was forced to take a break from competitive golf to undergo knee surgery late in 2019.

“We all accepted that the lockdown was crucial to curb the spread of the corona virus, but it was hugely disappointing to have the season cut off so abruptly just when I felt I had gained some real traction,” Williams said.

Williams and defending champion Vicki Traut shared the first round lead at Clovelly and the pair remained tied for the lead after carding successive rounds of 72.

However, the Durbanville Golf Club member broke away with back-to-back birdies at the third and fourth holes. She gave a shot back on the par three sixth, but turned with a slender one shot lead. 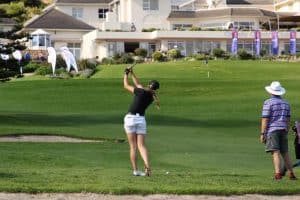 The eagle on 10 set the tone for her winning performance.

“My dad and I were standing on the edge of the green and I told him he didn’t even need to take out the putter. I just had that feeling and I chipped it in. Then, after I had a bit of a stumble on 12, I told him now we need to make some birdies.”

Williams fired four birdies on the bounce, giving her with a five-shot cushion with two to play. She sealed the seven-stroke victory after Van der Westhuizen dropped on 15 and 16.

“It was just a great day out there with my dad on the bag. Whenever I felt my nerves rising, he would just chat about the most random things. It calmed me down and brought me back into focus. We talked through every shot and it really helped me to execute the shots I wanted to play.

“It was just great to be back on the golf course in a competitive environment. I haven’t seen any of my friends since March, and just to re-connect and making new memories with them is what 2020 was supposed to be.”