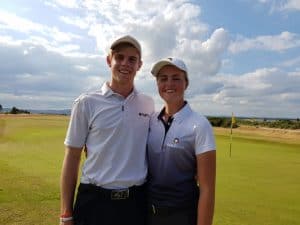 19 July 2018 – GolfRSA Elite Squad player Kaylah Williams turned a disappointing start into a memorable international debut when she fired a trio of birdies over the closing holes in The Junior Open Championship in Scotland on Wednesday.

Williams teed it up alongside Martin Vorster from the GolfRSA National Squad in the prestigious biennial event, staged by The R&A, in a field of 142 top juniors from 78 countries.

The 16-year-old Bellville golfer battled to come to grips with the true links style lay-out in the windy conditions and started the final round tied for 52nd after an opening 74 and a second round 77.

The flurry of birdies at the end of her final round saw Williams sign for a one-under 69 that catapulted her to joint 27th – a jump of 22 spots on the final leaderboard. 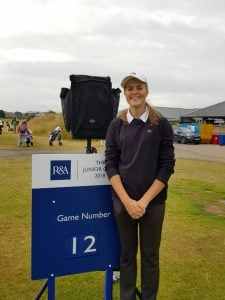 “It was difficult to keep a lid on my emotions after the first two rounds and I was definitely not a happy camper,” admitted Williams.

“I was three over after nine and I broke the biggest rule in golf. I started chasing birdies and I paid heavily for it with some really big mistakes. I started the back nine drop, double, drop. I told myself to get a grip and I started playing better.

“I made some pars, dropped a shot at eight and missed a birdie chance at nine. After the round I asked myself a lot of questions. I didn’t do what I wanted to do or what I was supposed to do and I knew it, so I had a much better mind-set going into the final round.”

Williams bogeyed the second, but got an unexpected lift at the third that set the tone for her round

“After a double bogey in the first round and a bogey in the second, I finally conquered the third with a par and that gave me a real boost.

“I stuck it stiff on the fourth and made the birdie putt. I hit a really bad tee shot at eight and paid for it with another bogey. I had an eagle chance at nine that just missed, but I nailed the birdie putt to get my round back to level par.

“I three-putted again at 12, but I made a good par at 13. I thought this was my comeback, but I three-putted 14 for another bogey. I made a great par at 15 and that’s when I told myself I’m not giving this course another shot.

“I made a nice long putt at the par five for birdie. It was a tester, but I nailed it and it really lifted my spirits. I hit 4-iron into the wind at 17 and had another long putt for birdie, but I boxed it again and then I really wanted to finish with a birdie so I could break par. 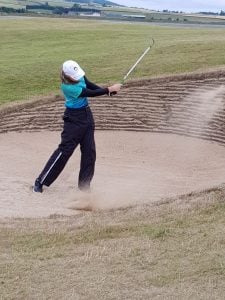 “I hit a very good tee shot and a great second and I literally walked the putt in. I needed it to turn and as I was turning my body, the ball turned and it dropped. I was so happy. It was such a relief to break par and to produce the kind of round I knew I’m capable of.

“You really don’t know what links golf is until you play it here. I’m extremely grateful that GolfRSA and Womens Golf South Africa gave me this opportunity. It’s been an incredible experience to play this course and I have enjoyed meeting so many players from all over the world.

“It’s been such a thrill to play at the Home of Golf in my first international event. I will treasure the memories of this experience forever. Martin winning the championship was just the most brilliant way to end the week and my only regret is that we don’t have time to play all the courses here, but I’ll definitely get that done one day.”