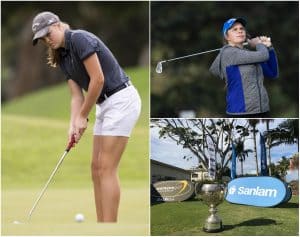 While the top qualifiers enjoyed a first round bye, Williams and Boonstra earned themselves an early start in the first round of the match play stage after Sunday’s seeding round.

Williams dispatched Ciara Koekemoer from Border 5 & 4 to advance to the second round, where she faced Caitlyn Macnab, South Africa’s fourth highest ranked amateur. The Ekurhuleni golfer won the first hole, but Williams squared the match at the second and won the third hole with a birdie.

The 16-year-old never relinquished the lead, eventually taking a 3 & 2 victory.

“Match play is tough, especially when you’re playing against friends, but as they say, no mercy on the golf course,” said Williams, who couldn’t help herself from saying ‘sorry’ to Macnab as they walked back to the club house.

“Caitlyn played such great golf and she’s so strong in match play. We matched each other shot for shot, but a few more putts dropped for me. I don’t mind having tough matches in a tournament like this, though. It keeps you on your toes and you can never get ahead of yourself.”

The Bellville teenager face another fierce competitor when she goes up against Zethu Myeki from Gauteng on Tuesday morning for a spot in the quarterfinals.

Myeki, ranked third, barely broke a sweat as she took down Petrone Rudolph 8 & 6.

The Ermelo golfer will also have a tough match on her hands as she takes on Danielle du Toit from Gauteng North, who beat Chloe Royston from Cotswold Downs 1-up.

The rest of the tournament favourites are still in the running.

Michaela Fletcher won the seeding qualifier and carried her hot form into the second round, where she mowed down Kim Turgut from Gauteng 8 & 6. The Maritzburg golfer will challenge for a quarterfinal spot against Annelie Swanepoel from Boland, who knocked out Demi Flanagan 4 & 3.

Cara Gorlei kept her title defence on track with a hard-fought 2 & 1 result against Ethel Ruthenberg. The Western Province player goes up against Symone Henriques from Gauteng in round three, who downed Cara Ford 4 & 3.

Former SA Stroke play champions Kaleigh Telfer and Kajal Mistry both advanced and will face each other in the third round.

Telfer beat Free State junior Pheletso Mota 8 & 6 and will face Mistry, who had a slightly tougher time to get past Larissa du Preez from Gauteng North, won the first and second, fourth and fifth holes to triumph 4 & 3.

Meanwhile the 2018 champion Casandra Hall made a strong case for the elusive double when she downed Tania Lyon from Eshowe Country Club 6 & 4. She faces fellow Ekurhuleni golfer Sarah Bouch in round three. The Tuks student eliminated Nadia van der Westhuizen 4 & 3.