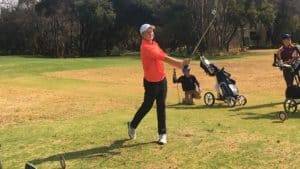 5 August 2019 – Laerskool Wierdapark threw down the gauntlet in the Ernie Els SA Primary School Championship with a commanding performance in the first round at Magalies Park Golf Club on Monday.

A total of 15 schools are contesting the ninth edition of the prestigious annual primary school team championship, hosted by four-time Major champion Ernie Els, at the popular holiday resort at Hartebeespootdam.

Raymond van Niekerk, Vian Jansen van Vuuren, Wessel Kruger and Nathan Schwartz combined for an opening total of 20-over-par 236 to open up a six-shot lead in the 36-hole event.

Van Niekerk led the charge with an even-par 72.

Manager Philip Loots was over the moon with the fast start from his team.

“The boys have played several times at Magalies Park and having some course knowledge certainly helped us today,” said Loots. “Raymond and Vian were solid out there and I have no doubt that Wessel and Nathan will step it up in the final round.

“We are really stoked about leading this event. It’s not a huge lead, but we will have a bit of a cushion to start with and I know the boys will give everything to keep us in the number one spot on Tuesday.”

William Reyneke (77), Benjamin van Wyk (82) and Luan Coetzee (83) posted a 26-over 242 for Midstream College to grab a share of second with Laerskool Vastrap. Jurie Blignaut led the way for the Rustenburg primary school with a round of 77 and was supported by Ian Bezuidenhout (81) and Aidan Drummond (84).

Defending champions Laerskool Kruinsig held the lead after nine holes, but was pushed back to fourth. Marno Lange (71), Juan Coetzee (87) and Darius Jansen (96) kept the 2018 winners within striking distance on 39-over 254.

St Sithians Preparatory rounded out the top five on 256.

Lange from Laerskool Kruinsig produced the only sub-par round on day one and his one-under-par 71 netted the Serengeti Estates junior the top spot in the Individual Competition.

He leads by one stroke from Van Niekerk and finished two shots ahead of Jansen van Vuuren from Laerskool Wierdapark. Mistream’s Reyneke and Blignault from Laerskool Vastrap share fourth on five-over with Laerskool Hendrik Schoeman’s Janko van der Merwe.