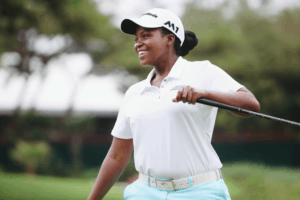 South Africa’s Zethu Myeki had a fine amateur career, but how will she fare on the professional circuits?

Southern Africa’s male professional golfers have won the third highest total of golf’s Major championships in the modern era, behind the USA and Great Britain and Ireland.

The men are currently stalled in this respect, with no one having won a Major since Ernie Els captured the Open Championship in 2012.

However the ladies’ winless drought stretches back to the ‘reign’ of the apparently inimitable Sally Little. South Africa’s most successful female professional golfer in any era, captured the second and last of her Majors (the Du Maurier Classic) on the LPGA Tour in 1988 and no female South African golfer has reached these heights since.

Several players have won on both the Sunshine Ladies Tour in South Africa and in Europe, but in terms of producing a springboard for SA developing a regular winner on the LPGA Tour in the USA, or a Major winner, these successes have proved to be something of a false dawn and only Lee-Anne pace, in 2014, has won an LPGA tournament in the last three decades.

There is hope that Ashleigh Buhai’s fifth-place finish at the British Women’s Open in 2018 might be a foretaste of bigger things to come.

Nobuhle Dlamini from Swaziland has won eight tournaments in the region since 2018 and is a past Order of Merit winner, but she still needs to make her mark overseas. Lejan Lewthwaite from Benoni has enjoyed back-to-back tour victories in 2020, while Southern Cape’s Monique Smit won the Investec Order of Merit this season.

Zethu Myeki might also be one to watch for the future. Her interest in golf was prompted by chance when she saw group of young people hitting golf shots at a school. This interest was then nurtured and sustained by the South African Golf Development Board’s programme and by the Ernie Els & Fancourt Foundation.

Zethu subsequently had a very successful amateur career, was capped as a Protea and attained a career-high position of No 2 in SA’s female amateur golfer rankings.

She has now turned pro and will face all the issues and challenges that this transition brings to most golfers.

So, there is plenty of promise, but what does it take for the ladies to make the crossover from being a top amateur to making it in the pro ranks, moving on to the bigger leagues of the US and European LPGA Tours and on to winning a Major?

Talent is an essential ingredient, as is hard work, as Gary Player is always keen to point out.

In my time as a coach, I was often approached by enthusiastic parents, keen to know what future ‘little Johnny’ or ‘Jenny’ had in the game, especially as a tour pro.

I would suggest that when their child could shoot 65 or less every time he or she teed it up at their home course and could beat most, if not all, of their amateur peers, then this would be a good indicator to turning pro.

I would add that this would be no guarantee of success – but would make them competitive in a pro tour pre-qualifying event (I am showing my age here in the era of all exempt tours!) and maybe they would make it out of 1 out of 4 of these into the main draw. I would conclude my summary on the realities of playing pro tour golf, by saying that ‘in the main draw they will likely to be able to make the cut (i.e. post a score which would generate a cheque) 1 in 4 times’.

This might sound harsh, but the reality for many with less than stellar talent and a matching Gary Player-like work ethic, is even less promising.

Once on tour, it is expensive to travel and pay the membership and entry fees, so most players struggle financially at even this basic level.

Even when successful at a regional tour level, the size of the prizemoney at each event will generally be insufficent on its own to sustain a player.

The support of family and the involvement of individual sponsorship for players and the continued investment by key event and tour sponsors is a key ingredient in sustaining an environment where players can develop. However, the player will need to show the golfing aptitude and extarordinary grit to suceed in their home tour.

If they do then manage to become a successful player at this level, the step up will in most cases will be equally tough.

That said, it can be done. Evidence of this can be seen in the likes of Tom Lehman, who spent years playing in local and feeder tours (including our own Sunshine Tour), before eventually making it on the ‘big tours’ and winning the Open Championship.

So we may well be watching a future star at SA’s amateur tournaments, or on the Sunshine Ladies Tour, but we shall probably have to wait a little while yet to see the emergence of a Southern African ladies’ Major winner.