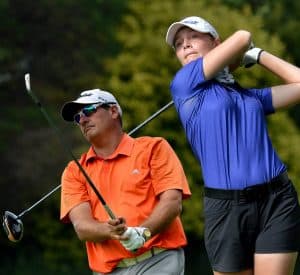 14 February 2021 – Sam Whateley delivered a mature and disciplined performance to lead the first round of the South African Women’s Stroke Play Championship, while veteran Ryan Dreyer turned back the clock in the 119th South African Amateur Championship qualifier on Sunday.

Whateley, who has risen to third in the WGSA Open Ranking following a run of eight consecutive top-10 finishes in the last 12 months, opened up a two shot lead in the opening round at Royal Johannesburg & Kensington Golf Club.

She fired three birdies and one solitary bogey to finish on 2-under-par 70 and was the only player in red numbers on a day of tough scoring on the East Course.

“I’m very happy with how I played,” said the 17-year-old Country Club Johannesburg golfer. “My goal was to try and hit every fairway today and I think I hit most of them and a lot of greens too. I missed a few putts, but overall I can’t be unhappy with my putter and I’m delighted to have the lead.”

Defending champion Caitlyn Macnab got off to a flying start and was two under after eight holes, but lost seven shots in eight holes around the turn. A late eagle helped her repair some of the damage as she signed for a 3-over-par round of 75.

In the B-Division, Casey Twidale (13) and Lea van der Merwe (12) opened with rounds of 18-over to share the lead with 17-year-old Tyla Potgieter.

The event’s youngest participant, 10-year-old Lisa Coetzer, is one shot back and Senayah Moodliar is two off the pace.

The ladies now turn to the West Course for the final two rounds of the 54-hole tournament.

On the West Course, former champion Dreyer fired a bogey-free round of 65 as the men kicked off the 36-hole stroke play qualifier.

The 48-year-old Kyalami golfer was one of four players tied for the lead on seven-under–par, while another four fired rounds of 67 as a total of 49 players shot level par or better on the opening day.

“My goal this week was just to come out and have fun,” said Dreyer, who won the SA Amateur at Benoni Country Club in 2009.

“It’s hard to compete with these youngsters – I mean the guy I was playing with hit it 50 yards past me and he’s 30 years younger than me. Hopefully I did show them that you don’t have to hit that far to have a good score.”

GolfRSA National Squad member Yurav Premlall fired a back nine of 30, including a closing eagle to grab a share of the lead. The 17-year old, who finished runner up in last week’s African Amateur championship, is hoping to secure his fourth senior win in the last 12 months.

“I’m right where I want to be, so let’s just see what happens,” said the Glendower golfer.”

Paarl Golf Club’s Ethan Smith, who qualified for the SA Amateur via Boland’s GolfRSA Race to 2021 series, also made it to summit with eight birdies and a lone bogey.

“I felt really comfortable out here,” the 22-year-old left-hander said. “Obviously winning the Race to 2021 series gave me a lot of confidence and it turned what would have been a bit of a waste of a year, due to Covid-19, into a positive one for me.”

The GolfRSA National Squad member has come into the flagship event carrying some great form, coming off a runner-up in the SA Stroke Play a fortnight ago and third in the African Amateur at Glendower last week.

The 19-year-old Ruimsig golfer is averaging an impressive 67.8 strokes per round in the GolfRSA South African Swing and is one of the hot favourites to lift the Proudfoot Trophy as the winner of the qualifier.

To do so, he will need another solid round as the field crosses over to Royal Johannesburg & Kensington’s East Course for the final round.

“The game is still solid, but I just lost a little bit of focus towards the end. A couple of loose shots cost me a bogey on the eighth and I didn’t hole my birdie putt on the ninth,” Van Wyk said. “But I am really pleased to have put myself in a strong position again.

“I’m looking forward to the East Course. It’s a proper championship layout. It’s longer than the West and the greens will be a little faster, too. I hope to give myself some decent chances.”

Van Wyk will also have to stay ahead of a chasing pack that includes Christiaan Burke, Kyle Kistensamy, Francois van der Walt and England’s Christopher Dyer on five under, with another four players a shot further back on four-under-par.

SA Stroke Play winner Martin Vorster and defending SA Amateur champion Casey Jarvis both signed for rounds of 69 (-3), putting them firmly in the hunt for another important title.