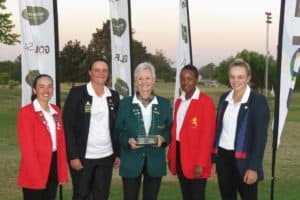 29 September 2019 – The WGSA Invitational Team claimed a huge victory for golf development with their triumph in the promotion battle at the 59th South African Women’s Inter-Provincial Championship.

Womens Golf South Africa offered four young rising talents the chance to gain experience in the premier women’s team event and the quartet embraced the opportunity with an unparalleled performance at Riviera on Vaal Country Club.

Not only did the WGSA Invitational Team make an immediate impact with a runner-up finish in the seeding round, but Kim Turgut and Tebogo Lefifi from Gauteng and Ekurhuleni duo Nicole Strydom and Kaylan Boshof combined beautifully in the match play stage to finish in the week in the winner’s circle with an unbeaten record.

The foursome mowed down Boland 5 – 1 in the opening round, and handed North West a 6 – 0 drubbing on day two to set a final round date with Western Province B, who defeated North West 4 – 2 in their opener and edged Border 3.5 – 2.5 in round two.

“I think of all the epic battles we witnessed on the final day, none were as tight as the final showdown between the WGSA Invitational Team and Western Province B for B-Section glory,” said Womens Golf South Africa President Sally Greasley.

“There was definitely a mood of nervousness on the tee as both teams tried to calculate what points they had and what they needed in order to win. With the final match going all the way to the 18th green, we couldn’t have asked for a more exciting finish.”

Strydom and Boshof lost their foursomes game 1-down and Turgut and Lefifi squared to start the singles 1.5 – 0.5 down to Western Province.

Their opponents were in the driver’s seat when Isabella van Rooyen downed Lefifi 7 & 6, but Strydom beat Zilke Bal 5 & 3 to stem the bleeding. Turgut beat Anita Chen 4 & 3 to square the match and it came down to the ding-dong battle between Boshof and Bobbi Brown.

The Western Province player took the lead on the second hole. Although Boshof won the fifth and seventh holes and halved the eighth, ninth and 10th holes, Brown never surrendered the lead.

“Bobbi was 2-up through 14 holes. Kaylan won the 15th, but Bobbi won 16 to go 2-up again. Then Kaylan won the 17th and they went up the 18th where Kaylan won the hole to square the game. That 3-all draw meant the WGSA Invitational Team beat Western Province B with 14 game points to 10.5 to lift the title,” said Greasley.

“The WGSA Invitational Team knew they had to win three of their matches to gain enough points to win and as soon as they were informed, they stepped it up. They were absolutely ecstatic about the victory and we couldn’t be prouder that these four girls embraced the opportunity we offered them and made the most of it.”

Greasley added that the achievement of the WGSA Invitational Team was not the only success for golf development at this year’s championship.

“The camaraderie between all the teams was amazing right from the start. Free State had a late emergency and was left one player short, but Mpumalanga arranged to bring an extra player at their own cost so Free State could compete with a full team,” Greasley said.

“The sportsmanship between the players was exemplary at all times, even when they had to contend with some pretty nasty weather when gale force winds blew across the course.

“This year’s tournament is proof positive that women’s golf is getting stronger each year. No less than 12 players made their debut in the A-Section of which 10 were juniors, and we had 16 new players in the B-Section, including nine juniors, six mid-amateurs and a senior.

“This was another very successful SA Women’s Inter-Provincial and we are enormously grateful to the members of Riviera on Vaal Country Club for allowing us to use their facilities for the past week.  The course provided some very exciting matches, and our two champions were undoubtedly deserving winners.

“Western Province A went out with guns blazing and Ekurhuleni realised they had to make a huge move after the turn if they hoped to retain the trophy. They produced some superb golf to turn things around. Our WGSA Invitational Team punched well above their weight and really showed that team work makes the dream work.”