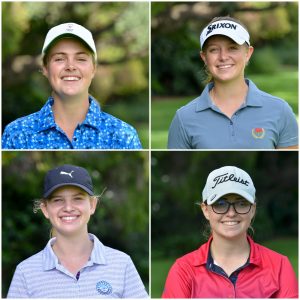 “Caitlyn and Kaylah both enjoyed great success on the domestic circuit last year and they were hugely instrumental in helping South Africa to our best result yet in the Astor Trophy in Canada, where the team tied for second in the quadrennial championship against Canada, Australia, Great Britain and Ireland and New Zealand,” Braude said.

Rising stars Kera Healey from Eagle Canyon Golf Estate and Marine Legentil from Country Club Johannesburg were the recipients of the two Most Improved Player Awards.

“Kera had seven top 10 finishes last year and capped her season with a momentous victory in the Champion of Champions tournament. She backed up her winning performance at Zebula Golf Estate and Spa with another landslide victory in the Nomads SA Juniors International at Rondebosch Golf Club in early March.

“Marine made giant strides in 2019, racking up seven top 10 finishes. She also represented Gauteng with pride in the South African Women’s Inter-Provincial Tournament and in the WGSA 72-Hole Teams Championship.

“All four girls are worthy recipients of our top honours. They represented their clubs, unions and the WGSA with pride and we are delighted to acknowledge their respective achievements.”

Former WGSA President Sally Greasley, who stepped down at the end of April, applauded the quartet on their achievements. “Having walked a road with these girls over the last three years, it was extremely pleasing to honour Kaylah, Caitlyn, Kera and Marine with their awards as my last act as President,” Greasley said. “All four girls have been incredible ambassadors for women’s golf during my tenure and they exemplify the values we uphold. I have no doubt that they will go on to achieve amazing heights, irrespective of whether they continue in golf or take other career paths.”