WGSA President Erica Lefson announced today that Ashleigh Holmes, Pam Hayward and Marné Roos will represent South Africa at the Regional All Africa Challenge Tournament to be played in Swaziland from 29th April to 4th May, 2009. 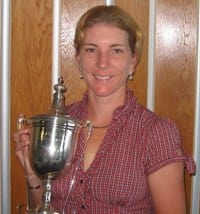 Ashleigh, Pam and Marné, all 1 handicap players on the WGSA top 10 ranking, will play in this biennial championship at the beautiful new Nkonyeni Golf Estate, an 18 hole bushveld course 25 km west of Manzini. Ashleigh will captain and manage the side. She has good experience at international level, having won the Turkish Open Amateur Championship at Antalya in August 2008.

Other teams competing in the tournament are Botswana, Zimbabwe, Namibia, Angola, Mozambique, Lesotho, Mauritius and Swaziland. This event is a get together of the Southern Region of Africa to meet one another and have a practice tournament in preparation for the All Africa to be held in Nigeria next year. An interesting aspect of this event is that carts will be used by all players and officials because the distances between the tee boxes on most holes are quite long and because of the heat.