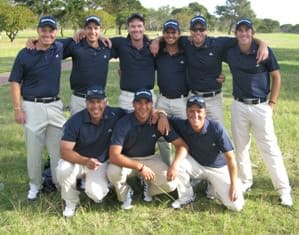 WESTERN Province made a clean sweep in the final round singles to win the South African Challenge Cup interprovincial at Port Elizabeth Golf Club on Thursday.

The final count in what turned out to be a two-horse race was 18 for WP and 16.5 for Central Gauteng.

The boys from the Cape had gone about their business quietly during the opening two days of the event and saved the best for last. The fact that they won all eight of their singles matches on the final day is a terrific feat and the team thoroughly deserved their victory.
Western Province manager Henk Smith was thrilled with his team’s effort.

“We actually tried to work on a formula last night but just decided to stick to your guns and tried to put strength against strength. It worked out perfectly,” said Smith.

He added that the win John Laurie achieved against Glacier South African Amateur champion and Central Gauteng star Ryan Dreyer in the final match of the day came as welcomed surprise.

“The game between John Laurie and Ryan Dreyer was very tight. We didn’t expect John to win but he came through nicely. That was the clincher for us,” said Smith.
Gauteng North ended a distant third with 12 points while the President’s team, who led after day one, finished fourth on 10.5 points.

The Most Valued Player of the Tournament award went to Central Gauteng’s Danie van Tonder who won all four of his matches. He was followed by Eastern Cape’s Justin Meister who managed three wins and a halve.