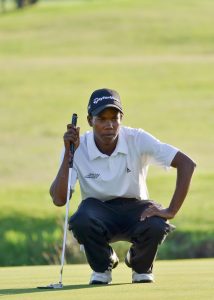 Western Province took down Eastern Province 9 – 3 and handed Boland an 8 – 4 drubbing in their opening gambit and the side didn’t spare Limpopo and Border in the second round at the Ernie Els Signature Course.

Limpopo went down 11 – 1 and Province demolished Border 10.5 – 1.5 to extend their lead in the standings to four points.

Boland banked two points after beating Eastern Province 7.5 – 4.5 in round one and gained two more with a resounding 10.5 – 1.5 victory over North West to take second spot in the log.

Border salvaged two points with a 7 – 5 result against Limpopo in the final match.

Western Province laid the foundation for another successful day on the Southern Outeniqua Hop with clean sweeps in the foursomes against both teams.

Limpopo suffered much the same fate, with their only gain a victory by Vincent Olley against Senger.

“Apart from Cameron, playing his 15th SA IPT, our side is very young, but they are a real bunch of fighters with a lot of heart,” said Western Province manager Carl Potgieter.

“Last year we got demoted on games points, so these guys are throwing everything they’ve got into their matches to make sure we won’t be counted out again.”

North West carried the confidence of two solid conquests in the first round into their second round clash against Boland, but the side were quickly pushed against the ropes by the 2012 champions.

Boland scored a clean sweep in the singles and LB Boshoff, Ethan Smith, Tyron Davidowitz, Phillip Swanepoel, Hennie O’Kennedy and captain Karl Ochse handed out further punishment in the singles. North West number one Christiaan Burke gained a solitary point for his team when he knocked out Luan Boshoff 5 & 4.

The match between Border and Limpopo was decided in the singles after the two teams drew 2-all in the morning session.

Boland and Border will have third round byes, while Western Province plays Mpumalanga and Eastern Province, North West and Limpopo face off in a three-way match.