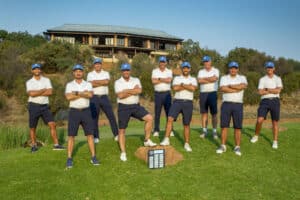 15 October 2021 – Western Province added yet another Inter-Provincial title to their collection this year when the Mid-Amateur team took the honours at Elements Private Golf Reserve.

The Union has achieved unprecedented success in the IPTs in 2021, with victories in the Men’s and Women’s premier events, as well as the Senior and Super Senior IPTs. On top of that, the women comfortably won the WGSA 72-hole Teams Championship in April.

The Western Province Mid-Am team came agonisingly close to winning the title two years ago on home soil, when one bad session cost them dearly and they lost out to Gauteng North.

This year, they were determined to claim the title and keep the province’s momentum going.

In the end, they had the tournament wrapped up with a day to spare, thanks to victories against KwaZulu-Natal and Free State on the first day, a narrow win against Ekurhuleni on day two, and maximum points against Eastern Province and Central Gauteng on day three.

When nearest rivals Free State slipped up against Central Gauteng on the penultimate day – while Western Province enjoyed a rest day – the title was theirs for the first time since 2016.

Not even a narrow final-day loss to Gauteng North could dampen their spirits as the Western Province team added yet another IPT trophy to the bulging cabinet.

“The team really had a special week,” said team manager Werner Theart. “Obviously they played well, and particularly in the big moments, but I was so impressed with the spirit amongst the guys. It is a great achievement for us to win an inland IPT– as all our other wins have come at the coast.” 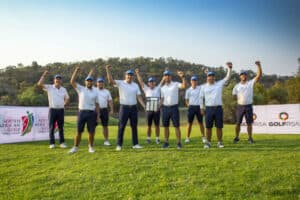 Team captain Elton James said it was gratifying to overturn a runner-up finish in 2019 with the win in Limpopo.

“Obviously we were gutted to lose to Gauteng North in our backyard two years ago, but we came here with a great team and a great team spirit, and got the job done,” he said. “It’s a pity that we couldn’t win the last one, but well done to Gauteng North, who was the better team on the day.

“We came here with five rookies, so on paper we probably didn’t rate as favourites, but everyone on the team put their hand up to get us to the finish line. I want to applaud all the guys for their incredible commitment and team spirit and send a big thank you to our manager for all his hard work.”

“So many little things have to go right to achieve these results. It’s hard to put my finger on it, but we have such a talented group of players here in Cape Town and we also have an established executive that runs the Union. It’s fantastic that all our teams seem to hit form at the right time.”

Free State claimed fourth spot, with Eastern Province in fifth. The relegation battle between Ekuhuleni and KwaZulu-Natal went down to the wire, but in the end, it was the men from the coast who was sent down to the B Section, losing on a games count-out after both teams finished on two log points.

One of Western Province’s novices also clinched the Most Valuable Player honour.

Geno Belfiore – another Province first-timer – tied for third on 10 points with Louis Moolman from Gauteng North, while former KZN standout Derek Scullard, who lined up for Central Gauteng, shared fifth on points with Ryno Ferreira from EP.