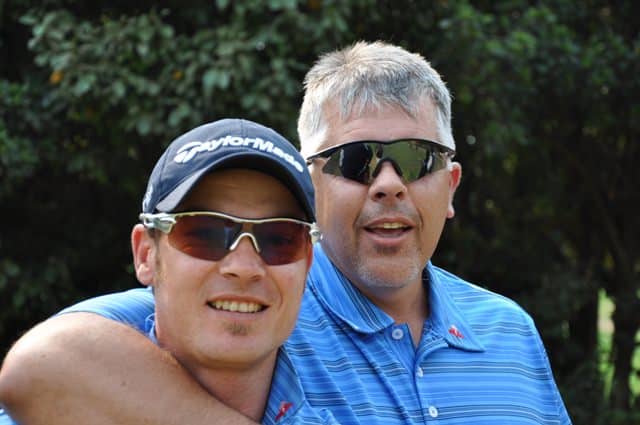 The Western Province strengthened their grip on the 50th South African Inter Provincial tournament at Pretoria Country Club by shutting out Central Gauteng in the afternoon singles on day two.

Central Gauteng led after the foursomes on 2½ – 1½, but the Cape coastal side hit back in the singles. Taking advantage of high winds, the Western Province won five of their singles matches.

“We knew we would have to dig deep this afternoon and the guys delivered,” said captain Aaron Russell, who holed an eight-footer at the 18th under thunderous applause from his team mates to halve the final match of the day and push the team to a 7-5 victory.

The defending champions led with 2½ points after the foursomes. Captain Ryan de Beer led the way with a 4&3 win, which was added to by Steven van Heerden, Derek Scullard and Jared Harvey, who beat JJ Senekal 3&2 to seal the team’s 6½ – 5½ victory.

Free State / Northern Cape skipper Josef Fourie had to withdraw due to a ligament injury sustained in the first round. Alternative Pieter Rademan proved a worthy substitute, tearing up the front nine with partner Desne van den Berg for a 5&4 win over Ivan Williams and Matthew Sutherland of Southern Cape in the foursomes.

The Eastern Province trounced their long-time rivals Border 8½ – 3½ to remain unbeaten in the B-Section alongside Gauteng North, who also strengthened their bid for promotion to the A-Section by beating Limpopo 6½ – 5½ and Mpumalanga 9½ – 2½.

Western Province may be hunting their 16th title in this team competition, but manager Henk Smith insists that the team is not looking any further ahead than their next match.

“So far so good, but we won’t get ahead of ourselves,” said Smith. “We have two in the bag, but tomorrow we face the Free State. They have proven to be worthy opponents in the past. It doesn’t pay to underestimate anyone.”

Smith added that he thought the team spirit has played a vital role in the teams’ success to date.

“I think team spirit is vital in a competition of this nature,” he said. “We have a wonderful, positive spirit in the team and the guys are really playing for each other. I think the team spirit also lifts their game to the next level.”

Central Gauteng captain, Ryan Dreyer, was shocked by the large margins with which some of his players were beaten.

“I’m dumbfounded,” said Dreyer, who halved his foursomes match with Tyrone Ryan and won his singles match 6&5 against Ryan Strauss. “We need to go back to the drawing board because we are really up against it on Wednesday.

“We simply have to beat Kwazulu-Natal if we want to stay alive in this tournament.”

“I was very impressed with the lads, especially with Brandon Stone. Not only did he ace the par-four 17th, but he handed out two dog licences today,” said Few, referring to a 7&6 hiding in the foursomes against Limpopo and another 7&6 dished out in his singles match against Limpopo number one, CJ du Plessis.

“And Hendre Cilliers; he pulled off the near impossible when he came back from three down with three to play to halve his match against DJ Burger.

“No, the boys have done exceptionally well and I hope we can keep the streak alive for the rest of the week.”

Eastern Province manager, Anton Prinsloo, was as impressed with his players although he admitted the final score line was far more flattering than the actual play.

“It looks really good on paper,” said Prinsloo, “but it was a little too close for comfort out there. Things were very tight at the halfway mark in almost all the matches. But the players were able to shut the door on their opponents in at least four of the matches and force two matches to halves.

“That gives me a lot of hope for the rest of the week. The way things are going in the log, we just have to bring our A-game to the table against Ekurhuleni and Mpumalanga tomorrow. Beating those two will set us up for a final showdown on Friday against Gauteng North.”