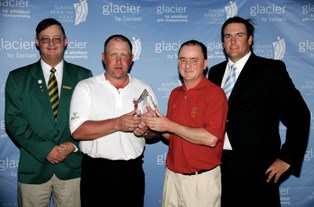 Nigel Edwards, ranked 27th in the world and the winner of the 2006 SA Amateur, and Craig Evans, the 1994 Welsh amateur champion, finished the 36-hole competition with a total of 291 for a five-stroke victory.

The competition was played during the 36-hole stroke play qualifier for the Glacier SA Amateur Championship, which also concluded on Monday.

Germany’s Max Fischer and Marius Junker finished second in the team event on a total of 296, with South Africa third on 297. South Africa’s Dylan Frittelli posted rounds of 75 and 71 while teammate Jacques Blaauw scored rounds of 77 and 74.

“It’s a good start to the week for us,” said Edwards. “Craig had a good round on the first day and I had a good one on the second, so we’re delighted to have won it. Hopefully now we’ll be able to take this form into the main match play section of the SA Amateur and contest there as well.”