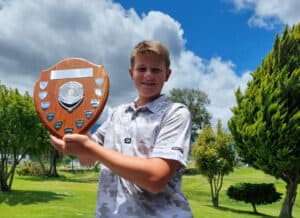 It was Weber’s third SA tournament victory after winning the Sun City U-15 Challenge and Dimension Data U15 Junior Open in 2022, but this triumph will go down as his best yet against a top-class field and some testing weather conditions in the 54-hole tournament.

The Border junior finished the windy opening day tied for lead with North West’s Minjun Heo and Dewan de Bruin, and went four deep in the rain on the second day to start the final round with a three-stroke lead over both Craig Cilliers of Silver Lakes and Dewan de Bruin of Fancourt.

“I didn’t make the greatest start,” Weber said. “I dropped four shots in the first eight holes, but I just stayed patient and kept my head in the game.”

The Selborne Primary star went on a birdie run from the ninth, firing five birdies in the next six holes, and the streak put him firmly back in the lead.

Although he bogeyed the 17th, he had already done enough to clinch the impressive win.

“I made it hard for myself in the morning, but through the turn it all came together. The putter was very cold at the start of the round, but I just tried to keep hitting greens, and eventually, the putts started falling. I just started enjoying it a bit more,” Weber said.

Minjun Heo of Pecanwood finish second on four-under and De Bruin managed to hang on to third, despite shooting a three-over 75 in the final round.

He made his debut in the SA Premier Inter-Provincial Tournament at Koro Creek Golf & Wildlife Estate, where he acquitted himself well by earning 6 points for Border. And in December, he accumulated 7 points for his province to help Border seal a third-place finish in the SA U-19 Inter-Provincial at Mbombela Golf Club – all while also fitting in two cricket tours for his school. 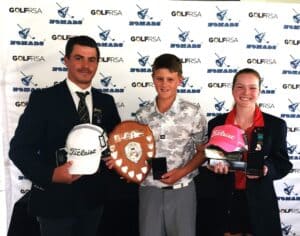 The win in Robertson was undoubtedly the biggest in his short career, and Weber, ranked No 1 on the GolfRSA U-15 Rankings, hopes to push his game even further this year.

“I hope to play in more of the open events around the country this year to gain experience competing against the more experienced players. It would be great to improve my ranking and to build my game,” said Weber.

Webster led after a first-round level par 72, but the Gauteng North junior relinquished the lead to Casey Twidale after battled to a 78 in the wet conditions on the second day.

Starting the final round three shots behind, Webster shortened the gap with an opening birdie and another gain at the sixth hole. The 14-year-old regained pole position with a final round 73 as Twidale from Randpark closed with a round of 78.

“I’m absolutely thrilled with the way I hung in there, and just stayed patient,” said Webster. “Conditions were tough at the start of the tournament. We had a lot of wind on the first day, and rain in the second round. Luckily my putter was on fire this week and my mental game was also strong. That ultimately got me the win.”

Webster and younger sister Maegan both entered the season-opener.

“This tournament is so much fun, and I was so glad that my parents decided to enter both of us this year. The views on the course here in Robertson was amazing and we both enjoyed it so much. It’s such a nice way to kick off the season, and now we get to enjoy a short holiday in Cape Town before school starts up again,” Webster said.