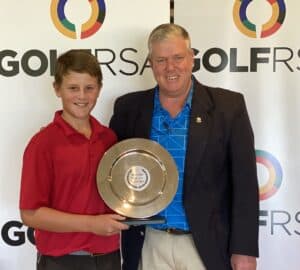 12 November 2022 – Border’s Benjamin Weber claimed his second victory of the year when he fired two rounds of 70 to close out a three-shot win in the Dimension Data Junior Open U-15 in George.

The 13-year-old, who plays out of East London Golf Club, lifted the Sun City U-15 Challenge title at the Gary Player Country Club in June and this latest victory boosts him to third in the GolfRSA Under-15 ranking.

The talented junior has had a particularly eventful last month of travel, starting with his debut in the SA Premier Inter-Provincial Tournament at Koro Creek Golf & Wildlife Estate, where he acquitted himself well by earning six points for Border – followed by two school cricket tours.

Weber’s win in the Dimension Data Junior Open U-15 was built on consistency.

He fired a blemish-free 70 in the opening round at Kingswood Golf Estate to take a two-shot lead and followed that up with a 70 at George Golf Club, conceding just one bogey to the course.

“There are some tricky bunkers on these courses, where you can land up in a lot of trouble,” he said. “My game plan was to keep the ball in play. I also chipped and putted really well, and it feels great to get another win. I have the Cape Town Junior Open to come, and then I’m looking forward to going back to school and spending time with my friends.”

Oubaai’s Ryan Melville finished runner up, three shots behind Weber and the only other player in red numbers after rounds of 73 and 70.

Paarl’s Ghery Rabie, who celebrated a hole-in-one on George’s 13th hole in the final round, finished third in a tie with Dewan de Bruin from Fancourt. Durbanville’s Henru Walters rounded out the top five.