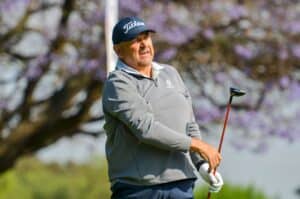 Former SA Mid-Amateur champion Graeme Watson from Ekurhuleni will vie for a unique SA amateur double in the final round of the 2021 SA Senior Amateur Championship at Glendower Golf Club on Friday; credit Ernest Blignault.

21 October 2021 – Former SA Mid-Amateur champion Graeme Watson will vie for the unique double after a classy second round performance moved the Ebotse senior within striking distance of the SA Senior Amateur Championship leaders on Thursday.

KwaZulu-Natal’s Lyall McNeill and Tom Sweigart from Qatar mastered the tougher conditions at Glendower Golf Club on moving day, carding successive rounds of 73 to share the lead on two-over-par 146.

A charge from afternoon starter Watson saw the 54-old leap ahead on the crowded leaderboard and he was one-over with two holes to play when disaster struck.

“I played nicely for most of the day; the greens were tough and there was quite a bit of wind. At the eighth I had a fairway in my hand, but the wind was playing so hard off the left and I changed to the driver.

“Unfortunately, I drove it in the water left and I hit a poor shot from there and ended making a double bogey. That wasn’t a great finish to the day, but I would have been pleased with a 72 when I started, so I am happy with where I positioned myself.”

McNeill, who leads the GolfRSA Senior Rankings, is making his debut in the SA Senior Amateur and he could be a tough man to beat. In his five starts this season, the Durban Country Club golfer has won a trio of titles and was the runner-up twice.

Watson believes he can chase down McNeill, but he will have to limit his mistakes.

“I will have to take some of the bad shots I hit over the first couple of days out of the game. You can’t hit shots like that and win a tournament of this stature. So, if I can keep those bad shots off the cards, I have a chance.” 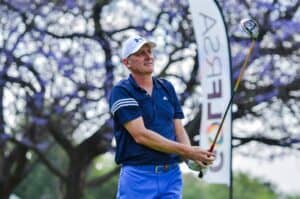 McNeill found the going on the greens a little tougher on day two, but he is feeling comfortable with his game and his chances to win on debut.

“The greens were definitely a little bit faster, and the pin placements were a bit tougher,” said the 50-year-old.

“I struck the ball well and the putter was warm, but I did let a few shots slip. My best save of the day was definitely at the fifth, where I hit a bad drive and got a bad kick. I had to carve a 6-iron about 20 meters around some trees, and then made a brilliant up-and-down from there. I made two good birdies on 13 and 14 to get to 1-over, but unfortunately, I bogeyed the final hole.

“All in though, it was a pretty solid round. It’s going to be a tough match against Graeme; he is a very strong player with a really good short game. I’ll need to hit a few more fairways than I have been hitting and try to avoid any big numbers to hopefully have a shout coming down the back nine.” 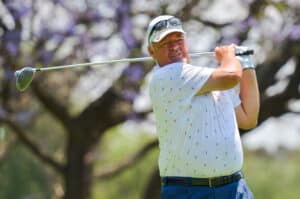 Meanwhile the South African pair would do well to keep an eye on Sweigart.

The 64-year-old golfer turned four-over after a bogey on 17 and a double on the 18th, but he played his way back into contention with a trio of birdies coming home.

First round leader Neil Homann will aim to turn his tournament around after carding 80. The Bryanston golfer is eight shots off the pace in a tie for 8th with Modderfontein’s Blaine Mancer.