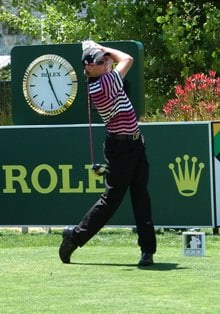 The Eisenhower Trophy was reduced to a 54 hole tournament by the International Golf Federation after half the field could not complete their second round on Friday.

Play was suspended twice on Friday, due to lightning.

The prestigious team event, being played over two golf courses, the Buenos Aires and Olivos Golf Clubs, just outside the capital city of Argentina, continued on Saturday in perfect weather.

In golf there is a saying which describes one’s luck on the golf course: ‘Rub of the Green’. South Africa’s team manager and South African Golf Association’s president Colin Burger found himself on the wrong side of the ‘rub of the green’!

“I am disappointed,” was the first thing he said in a telephonic interview on Saturday. After his team had to endure eighteen holes of the worst weather on Friday, he awoke to a beautiful day for golf in which half the field needed to complete their rounds.

However his disappointment was short lived because South Africa managed to move up the leader board when all was said and done, finishing the round tied in 32nd position without playing another shot. This meant that teams struggled to capitalise on the better conditions in concluding their second rounds.

The third round commenced at four o’clock on Saturday, with the three South Africans teeing off on the Buenos Aires Golf Club layout.

JG Claassen recorded two birdies and two bogeys to also be even after six holes.

These two players scores enabled the South African team to move up the team leader board to twenty fifth place.

Still battling his way through the competition is the twenty year old player, on a golf scholarship at the University of Texas, Dylan Frittelli. He was six over and thanks to a birdie on the ninth hole, he managed to turn in 41, five over par.

The South African team score is currently even par for the round and thirteen over par for the Eisenhower Trophy, which forms part of the World Amateur Team Championship.

Being twenty shots off the pace set by the French Team, who made up the four shots they dropped playing in Friday’s atrocious weather, to finish the second round on even par and record a thirty six hole total of seven under par, the South Africans can now only play for pride. Any hope of a top finish having dissipated along with the bad weather of Friday.

The third and final round will commence at 09h00, local time.

(Third round results will be published on conclusion of the round)