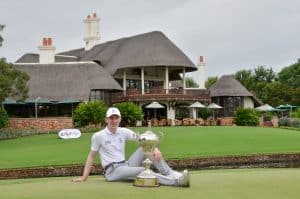 14 February 2019 – It’s been quite a week for the Scots on the global golfing stage, with former SA Stroke Play champion David Law’s success on the European Tour in Australia last weekend and amateur golfer Euan Walker’s march to victory in Mpumalanga on Thursday.

The Scottish National Squad members have enjoyed a serious amount of success in South Africa over the last eight years, set in motion by Michael Stewart’s triumph in the Sanlam SA Amateur Championship in 2011.

Brian Soutar echoed the feat when he beat a young Brandon Stone at Mowbray Golf Club a year later and Daniel Young and Craig Ross followed suit in 2015 and 2016 respectively.

Two years ago, Liam Johnston conquered Leopard Creek to win the African Amateur Stroke Play Championship and Walker extended the Scottish honour roll when he claimed the same prize with a three-stroke victory on 11-under-par 277.

The Ayrshire golfer opened with an even-par 72 and carded successive rounds of 67 to surge to the top of the leaderboard.

However, unlike the grandstand eagle finish 18 in round three that set him up with a four-shot cushion over GolfRSA National Squad member Garrick Higgo and Ludwig Aberg from Sweden, Walker’s final trip to the iconic closing hole on the final day required a bit more finesse.

“The round was a bit of an emotional rollercoaster,” said Ayrshireman. “I made three birdies in the first four holes, but I felt nervous throughout. After a great start, the wheels came off when I dropped five shots in three holes from the fifth.

“I was just two shots clear of Garrick and Ludde heading to the back nine and I was feeling the pressure. I steadied the ship with a birdie at 10. That took some of that nervous tension away and then I chipped in for eagle at 13 to get some breathing space. A lot of things went my way and that chip in was one of them. It was huge for me, because it allowed me to settle down, even though the gap was just four shots.”

Walker lost the advantage of a birdie at 14 to a bogey at the next hole, but par saves at 16 and 17 had him heading to the final hole with his four-shot cushion still intact.

“I hit my tee shot down the right and I had 107 yards flag, which was an awkward distance for me,” he said. “The nerves were back, so I took a club less. I wanted to hit a smooth 54 degree, but I absolutely juiced it.

“I was willing the ball to get on the green and I watched it roll right over the green, but I got lucky again and avoided disaster when my ball stopped in the rough, just inches from the water.”

Walker had to balance on the stone wall that surrounds the island green and chip to the pin, which was stuck in a small valley right in the middle of the green.

“I wasn’t even thinking about the water right behind me,” he said. “All I could think of was that I shouldn’t duff it and have to watch it come back down the slope and into the water. I would have been happy with anywhere on the green from there.

“I actually played a really nice shot. The strike was perfect. I’ve been working on my short game a lot recently and I am glad in that moment it was very worthwhile. It came up just short and I had a three-footer for par and the win.”

Walker hopes to take the same route as Johnston, who used his victory in 2017 as a springboard to the pro ranks. After two wins on the Challenge Tour, he earned promotion to the main European Tour circuit this season.

“I think everyone on the squad aspire to follow in Liam’s footsteps and a win like this certainly brings me closer to achieving that,” Walker said. “Winning at this golf course definitely showed me that I can compete on a European Tour course and that’s a big positive for me.”

Aberg and Higgo were neck-and-neck until the final hole, where the lanky Swede found the middle of the green with his approach and Higgo’s second plugged in the greenside bunker.

A closing four-under 68 netted Aberg second on 280. The South African made a good up-and-down after working the trap shot away from the flag and a 71 saw him settle for third on 281. But the duo will get another stab at international glory when the Sanlam South African Amateur Championship tees off at King David Mowbray Golf Club on Sunday.

India’s Kartik Sharma and South Africa’s leading junior Jayden Schaper tied for fourth a further shot back after respective rounds of 68 and 70.