Martin Vorster and Kaylah Williams are representing South Africa in the 2018 Junior Open, staged by the R&A, at St Andrews in Scotland; credit GolfRSA.

16 July 2018 – GolfRSA National Squad member Martin Vorster took the first round lead in The Junior Open, while Kaylah Williams made a solid international debut at St Andrews Links on Monday.

Vorster from Southern Cape and Williams from Western Province are representing South Africa in the biennial pre-cursor to The Open, staged by the R&A.

The 54-hole curtain-raiser attracts the world’s top junior golfers and is being staged at the Eden Course at the Home of Golf this year, which is just down the road from Carnoustie, where the third major of the season begins on Thursday.

Vorster fired five birdies for an opening round of four-under-par 66 and will start today’s second round one shot ahead of Argentina’s Abel Gallegos.

The Mossel Bay junior got off to a birdie start, but three-putted six to lose the early advantage. He picked up another shot at nine and reeled in three more gains at 14, 15 and 16. 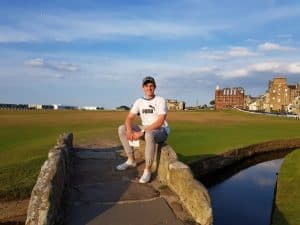 “I was a little annoyed when I got to my ball after the opening tee shot and found it in a divot,” said the 17-year-old Louis Oosthuizen Junior Golf Academy player. “I had 70 metres in, so I played a bump-and-run with a pitching wedge and left myself a foot-long putt for birdie.

“I two-putted for birdie at nine and I boxed a 20-footer at 14 after I leaked my tee shot left. I hit pitching wedge downwind from 155 metres to 15 foot and holed the birdie putt at 15 and just missed an eagle putt at 16 after a good drive and a 7-iron to 10 foot.”

His experience playing the links courses at Gullane and Craigielaw during the US Kids Golf European Championships in 2011, 2012 and 2014 stood him in good stead.

“Links golf in Scotland is completely different to the links courses back home and it definitely helped that I’ve played here before,” he said. “It’s quite an adjustment. The practice round helped to get me used to the bump-and-run shots, because you don’t get much spin here. Although the putter was a bit cool, I hit every green in regulation and gave myself chances to score.”

Brandon Stone headed to Carnoustie buoyed by his runaway victory in the Scottish Open on Sunday, while fellow GolfRSA National Squad member Jovan Rebula will also join the South African posse in the starting line-up at The Open following his success in The Amateur Championship at Royal Aberdeen last month.

Vorster had the chance to make it three in row for South Africa in Scotland, but the 17-year-old from Mossel Bay is not thinking that far ahead.

“Just after Jovan won The Amateur, he came out to support the juniors during the final round of the Dimension Data Junior Open at Kingswood,” said Vorster, who finished second in the Sunshine Tour Junior Series Event.

“He talked to us about believing in ourselves, about working hard and staying in the moment. I’ve had some disappointments recently where I pushed too hard, too early. All I’m doing now is playing shot for shot and we will see where it takes me.” 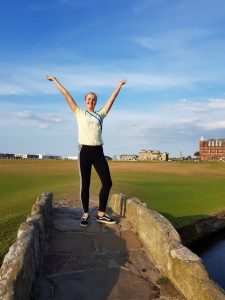 Williams was six over through 12, but the GolfRSA Elite Squad member rallied to finish with a 74 that netted her a share of 30th.

“So far this has all been amazing,” said the 16-year-old Bellville golfer. “To stand on the Swilken Bridge at the Old Course, to have Jordan Spieth at the opening ceremony, to be playing here at the Holy Grail of Golf…this is really a dream come true.

“It could have gone better, especially after a birdie start, but I made a few bad choices and paid for it with doubles at three and seven. I realised something was very wrong, but I couldn’t put my finger on it and I didn’t want that to bring me down.

“I told myself I had plenty holes left and I was so pleased with the birdie on nine, but then I dropped three shots in a row. I realised I was spraying it off the tees, so I decided to play my own game. I hit some cuts and made pars at 13 and 14.

“When I got on the tee box at 15 and told myself to ace the hole. I stiffed my 9-iron and holed a three-footer for birdie. After a good drive at 16, I hit 6-iron over the green and my chip shot horse-shoed, but I sunk the birdie putt to get back to four-over.

“Both my birdie putts at 17 and 18 lipped out, but I was very happy about my comeback and how I was able to get a positive mind-set going after the earlier setbacks.”

The leading 80 players in the field of 135 competitors will progress to Wednesday’s final round.