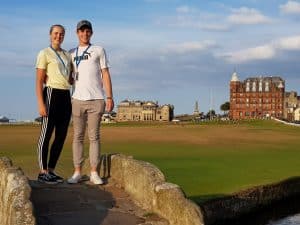 Martin Vorster and Kaylah Williams are representing South Africa in the 2018 Junior Open, staged by the R&A, at St Andrews in Scotland; credit GolfRSA.

17 July 2018 – South Africa’s Martin Vorster opened up a yawning lead in the second round of The Junior Open as compatriot Kaylah Williams continued to come to grips with the challenge of links golf in Scotland on Tuesday.

Vorster fired an opening four-under 66 and slept on a one shot lead into the second round at the Eden Course at St Andrews. When the 16-year-old GolfRSA National Squad player pitched up for his afternoon tee time, just one player had reached his overnight target of four-under.

The Louis Oosthuizen Junior Golf Academy member fired a five-under 65 to finish five shots clear of the chasing pack, led by Tsubasa Kajitani from Japan and Adam Pedersen from Denmark.

The South African junior started with five straight pars but stormed clear with four birdies on the bounce from the par three 15th. He gave a shot back at four, but drained a 30-footer at the par five ninth for an eagle finish.

“That was a nice way to finish,” said Vorster, who has a 36-hole aggregate of nine-under-par 131.

After two-putt pars at 11, 12, 13 and 14, he got a touch more aggressive with his approach shots and the tactic paid off for the Pinnacle Point golfer. 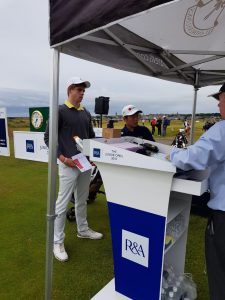 “Conditions were tougher on the back nine, but I was pretty solid. We teed off in a one-club wind, but by the time we turned, it was pumping. We were playing in at least a three club wind. The last three holes were pretty tough, and I was really pleased to finish with the eagle.”

Vorster kept his round ticking along with a good up-and-down for par at the second, but the putter let him down at the par four fourth.

“I hit my tee shot too far right and I couldn’t get too aggressive with my approach,” he said. “The green is very small and raised, but I managed to get on and then I three-putted from 20 foot.

“I made solid pars for the next five holes and hit a great tee shot down the middle at the ninth. It was playing downwind, so I could go for the green, but I took 9-iron in. The greens are firm and I didn’t want to overshoot the green. I finished 30 foot short of the hole and boxed the eagle putt.

“The eagle put me in a very positive frame of mind for the final round. The key will be to play the course and not to get distracted by what the other players do.”

The 16-year-old Kajitane – the only girl in the top 10 – and 13-year-old Pederson both carded rounds of 68. New Zealand’s Jayden Ford and Abel Gallegos from Argentina are a further three shots back in fourth on one-under par 139. 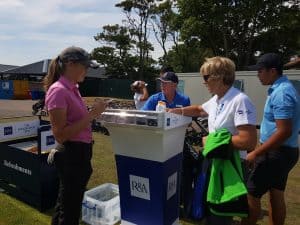 Western Province’s Williams carded 74 in her introduction to true links golf, but just as the 16-year-old GolfRSA Elite Squad player thought she had a grip things, the strong, gusting wind added another dimension.

The Bellville golfer had a double bogey at 14 and a bogey at 17 on her outward loop, but dropped five more shots coming home to sign for 78. She is 12 over and tied 49th.

“I am really happy that I’ve made the cut in my first international event and that I’ll have another chance to play this course,” said Williams. “It’s very different to what I’ve grown up with and I’m learning so much here. I hope the experience will help me produce my best effort in the final round.”

The 36-hole cut, which fell at 19-over, shortened the field of 142 golfers from 78 countries that started the event to 86 competitors for the final round.