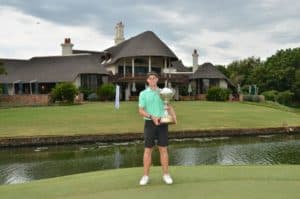 On Thursday the 18-year-old Southern Cape golfer boxed a 30-footer for eagle in the final hole of regulation play to force a play-off, then wore down his opponent in the fourth hole of the sudden-death shoot-out to win the African Amateur Stroke Play Championship at Leopard Creek Country Club.

Vorster edged out Great Britain’s Olly Huggins when he made par on the first hole, after replaying the 18th three times was not enough to break the deadlock when both players finished on four-under-par for the tournament – and those play-off holes were interrupted by a lengthy weather delay after they had played 18 again twice.

“It was unreal,” said Vorster. “I’m speechless. This win means so much to me.”

It means a lot, because it was Vorster’s fourth international victory in four years after he won the 2017 Italian U-16 International, 2018 Junior Open and the 2019 East of Ireland.

For long periods of the final round, Huggins was in control by virtue of his smart play and his great putting. He laid up on all the par-fives, aimed for the biggest part of the greens in the face of tough pin positions and then making putts when he needed them.

Vorster, however, was stalking him through the back nine.

A birdie on 15 put him within two strokes of the lead. “I had a bit of a rough start,” he said. “After nine holes, I knew I was a bit behind and I had to make a few birdies. I made two on 13 and 15, and then missed a very short one on 17. I knew then that Olly had finished on four-under so I had to make the eagle on the last – thankfully it fell!”

That it did fall was in no small part due to some good putting all week.

“The putting definitely saved me this week,” he said. “I made a few good ones down the stretch, and the one on 18 in regulation was the longest for the week and it happened at the right time.”

For the play-off, Vorster unfurled his power game, and Huggins, so conservative in regulation, was compelled to follow suit. It all worked well for the Huggins until they returned after the weather delay to set off down 18 for the third time. 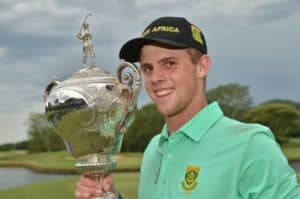 The Louis Oosthuizen Golf Academy player took advantage of a tailwind that had picked up, and smashed his drive 40 metres further than he had at any time before during the week.

It left him a gentle wedge to the green on the par-five with the island green, and, although the pair shared the honours for the third time in the play-off, the change in the routine to the first had left Huggins clearly somewhat intimidated.

Although Vorster smashed his drive into the right rough on the first – the next designated play-off hole – he had got into Huggins’ head.

The Englishman short-sided himself, Vorster recovered well enough to chip his third to a foot while Huggins was 20 feet away from the hole for three.

And that was all Vorster needed.

“I’m gutted obviously,” said Huggins, “but I’m really happy with the week. I’ve done what I said I was going to do, which was hit fairways, hit greens, make the putts – I played really nicely. I found out how to play this course after the first round when I shot four-over.”

In third place behind the dramatics provided by the play-off was Ryan van Velzen, who led through the first two rounds. The Benoni teenager recovered from his third-round blowout of 11-over-par 83 to post a final level-par 72 to end up on two-under, just two shots off the top of the leaderboard.

England’s Joseph Long shot the round of the day with his six-under-par 66, one better than Huggins’ effort, and he shared fourth place with South Africa’s Jordan Duminy. The Irish duo of Caolan Rafferty and James Sugrue finished on three-over for the tournament to share sixth.

For Vorster, it was a victory to savour. “I just want to thank everybody for the support,” he said, “and the people who came out to watch the play-off. It was a relief to find my ball on that final hole, and then to get it up and down from the edge of the green was great.”