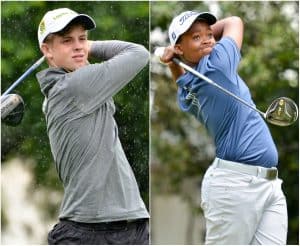 Martin Vorster and Rori Nkosi are the early leaders in the Dimension Data Junior Open in George; credit Ernest Blignault.

27 June 2018 – The value of international competition was amplified in George on Wednesday with Martin Vorster and Rori Nkosi leading the Dimension Data Junior Open tournaments at Kingswood and Fancourt on Wednesday.

Less than two weeks ago, Vorster fired a 10-under 61 in the final round of the Toyota Junior Golf World Cup in Japan. His course record to help the GolfRSA Boys team to a top five finish in the team event at the Chukyo Golf Club.

While the Southern Cape junior was setting the Ishino Course alight, Nkosi from North West finished up in the Himbara World Junior Golf Championships with a top seven finish Indonesia.

It wasn’t the ideal day to start the first event on the Sunshine Tour Junior Tour as the rain showed up quite early and pounded the players at both venues in the popular Garden Route stop.

Vorster, a member of the Louis Oosthuizen Junior Golf Academy down the N2 at Pinnacle Point Golf Estate, fired an impressive three-under-par 69 in the challenging conditions to take the lead in the Under-19 tournament at Kingswood.

“The weather was really challenging and I just reminded myself to stick to basics and to go through my processes on every shot,” said the 16-year-old GolfRSA National Squad player.

“I two-putted the first and the third for birdies, missed a really short putt for par at four and managed to get the shot back with a birdie at seven.

Vorster birdied 11 but hit a 2-iron out of bounds right on 13 and dropped a shot.

“The rain was bucketing down from the 13th and the wind was pumping,” Vorster said. “I made some good pars to keep the round going. At 16, I hit driver off the tee, 3-iron for my second and 9-iron from 110 metres into the green to give. I tapped in for four to get to four-under.

“I parred 17 and missed the green right at 18. I chipped it to five feet, but I missed the par putt. It was a tough day at the office, but if you could keep it in the fairways, you still had a chance for birdies.”

Not surprisingly, Christo Lamprecht was hot on Vorster’s heels.

The George golfer returned from the GolfRSA UK Tour buoyed by an international breakthrough in the East of Ireland Amateur Championship. Lamprecht eagled the first, as did Central Gauteng’s Marcus Taylor, and the pair tied for second on two-under.

Ekurhuleni’s Casey Jarvis, who won the Nomads SA Boys Under-15 Championship at Kingswood in January, carded a one-over 71 to round out the top 10 alongside Jordan Duminy, Daniel Cronje and Oliver Goldhill.

Nikhil Rama from Bryanston Country Club definitely had the best finish of the day with his first ace.

The Central Gauteng junior holed out with a 5-iron from 155 metres into the wind at the par three closing hole and the one on his card for a 75 propelled Rama into the top 20.

Nkosi from Pecanwood overcame a bogey start with a birdie at the second at the Outeniqua course at Fancourt and set the first round target with a three-under 69.

The 13-year-old SAGDB golfer reeled in further gains at seven, eight, 10 and 11, He gave two shots back with a pair of bogeys at 13 and 14, but steadied the ship with pars at 15, 16 and 17 and knocked in signed off with a birdie finish for pole position.