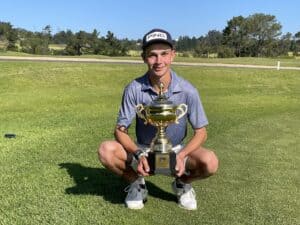 Ivan Verster fired a thundering 64 in the final round of the Friends of Engelberg Championship, hosted by Anna, to claim an eight-shot victory at Devonvale Golf & Wine Estate

12 August 2022 – Pinnacle Point’s Ivan Verster blew the competition away with a remarkable final round of eight-under-par 64 to win the Friends of Engelberg Championship hosted by Anna by eight strokes.

The Louis Oosthuizen Academy member shot rounds of 72, 67 and 64 at Devonvale Golf and Wine Estate to finish at 13-under-par 203.

GolfRSA National Squad member Amilkar Bhana, one off the pace at the start of the final round, finished a distant second on five-under, a stroke clear of Pearce Nash Lewin after the pair closed out their campaigns with respective rounds of 70 and 71.

Verster has been on a heater of a run of late.

The Southern Cape junior announced himself with victory in the Nomads Coastal Order of Merit event at St Francis Links in July, before finishing in a tie for second in the Tshwane Junior Open.

With this latest win, Verster has risen to fourth in the GolfRSA Junior Ranking.

Starting the final round with a slender one-shot lead over Bhana and three clear of Lewin, the 18-year-old Verster birdied his opening two holes, before adding birdies on the sixth and eighth holes to turn five clear of the chasing pack on nine-under. 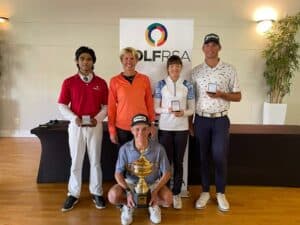 Rather than playing it safe to protect his lead, Verster kept targeting the flags.

He reeled in a trio of birdies on the 10th, 11th and 13th holes and signed off a final birdie on Devonvale’s tricky 18th hole for a blemish-free 64 that ranks as one of the best rounds of his life.

“I played in this event last year and finished second, so I’m absolutely stoked to have gone the distance this year,” said the delighted youngster. “I really like the course and this year the weather was much better than the rain and wind we had to contend with last year. I felt confident taking out the driver more often, and to attack the pins. My putter was really good this week and it felt great to sink some long putts.”

Jasmine Furstenburg made it a clean sweep for Southern Cape when she took the honours in the Girls Competition.

The GolfRSA National Squad member carded rounds of 75, 73 and 77 to finish on seven-over, five shots ahead of second-placed Erica Chen from Western Province and Border’s Kesha Louw.