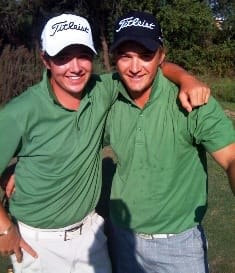 The overnight leader from Country Club Johannesburg in Central Gauteng, by his own admission, battled through his final round, recording a four over par 75. “With the wind combined with the fact that the flags were tucked away on the greens, made play today quite tough,” said a satisfied Versfeld, after his round.

Steven van Heerden, like Versfeld is also a member of South Africa’s Zone VI team playing the Gaborone Golf Club in preparation for next week’s competition, recorded a level par 71 in his final round to tied for the lead after 54 holes. 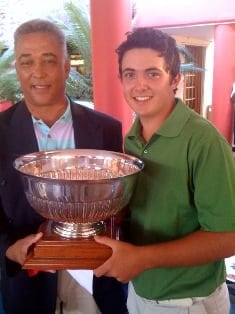 Versfeld birdied the first playoff hole to edge one ahead of van Heerden. The two players played the next two holes in regulation in a tense and closely fought playoff. Versfeld, who has come close to winning this year, finishing runner up in the Glacier SA Amateur Qualifying and the losing finalist in the Glacier SA Amateur, went one better recording ‘the biggest win of my career,” he said.

South African team captain, Jared Harvey, redeemed himself somewhat today recording the best round of the day amongst the eight South Africans playing. He went around in a two under par 69 despite recording eagles on holes 5 and 10.

Sefiso Vilane, a seasoned campaigner on the amateur circuits in Southern Africa, recorded a remarkably good final round of four under par 67, to move into third place on his own, on 214.

Tomorrow is a practice day for the South Africans after which they will take on the leading players from ten countries making up the southern part of the African continent in the annual Zone VI Team competition. South Africa have won this tournament with monotonous regularity and will start favourites to wrest the title again come Tuesday.