Versfeld leads going into final round 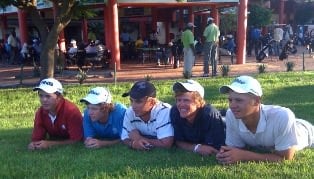 Allan Versfeld took a two shot lead, going into tomorrow’s final round of the 54 hole Botswana Open. The Central Gauteng golfer played 36 holes of the Gaborone Golf Club layout today finishing on a total of 138, four under par, with rounds of 67 and 71.

Following him, in the stroke play tournament, in second place is fellow South African Danie van Tonder who had rounds of 69 and 71.

“Conditions were a little tougher today,” said Enver Hassen, President of the South African Golf Association and team manager. “It was very hot which made the course drier, particularly the greens which meant that they were not holding.”

Scott Vincent, of Zimbabwe, who recorded the best individual score in the Africa Junior Golf Challenge played at Glendower Golf Club in Johannesburg this week, continued his fine form finishing on 141 after rounds of 72 and 69.

In all sixty seven players teed up in today’s first and second round. There are eight South Africans in the field, all of whom have been selected to play in the Zone VI team tournament which will be played at the same venue starting on Tuesday. They are using this event as preparation for next week.

All but one of these players finished at the top end of the leader board. This was team captain Jared Harvey. The Kwazulu Natal player was struggling with a bit of flu this morning and stumbled to an 81. He came back strongly in the afternoon with a 73, but at 154, for 36 holes, twelve over par, he is well off the pace.

The final round will be played tomorrow.