Versfeld leads after the first round

EAST LONDON, 28 February 2010 – Allan Versfeld’s early 67 at East London Golf Club held up for the first round lead in the Glacier SA Amateur Championship qualifier, but Donavan Pearce and Ryan Hyde were nipping at his heels at the end of the day.

The 19-year-old Gauteng standout has put himself in prime position to make a strong run for amateur golf’s most prestigious title with a flawless round but he has just a slender one shot lead over Pearce and Hyde at five under par. 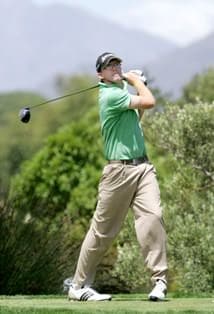 Only 36 players in the 142-man field managed to break par including defending champion Ryan Dreyer, who signed for 75, but newly-crowned SA Stroke Play champion Dean O’Riley hopes his putter catches up with the rest of his golf game after signing off on a disappointing 75.

Versfeld buckled down to work early and tee to green, his game plan proved deadly accurate. He blitzed the first nine holes in four under with birdies at the 11th, 15th, 16th and 18th and converted twice on the way home to secure the clubhouse lead.

“I had no real expectations when I teed off because this is tough course. The plan was just to keep the ball in play and try to keep the scorecard clean,” said Versfeld, who set up his front nine birdies with accurate irons off the tee.

“I was never really in trouble today, which was quite nice around here. I hit the driver maybe four or five times out there today; the rest of the time I relied on my irons.”

Like Pearce of Germiston Golf Club and Heidelberg’s Greyling, Versfeld credited the greens for his flawless fortune. “The greens here run so true; they must be some of the best greens I’ve ever played on.”

A tip from nine-time Major winner, Gary Player and fellow King Edward VII High School Old Boy, is behind his new-found from and dedication.

“He talked to us at school at the end of last year and said that we shouldn’t consider turning pro before we can consistently shoot below par rounds,” explained Versfeld. “I decided to take a year and work on getting consistent results and bringing my average down.”

Meanwhile Limpopo amateur Hyde delivered a dramatic front-nine push of seven under par, including two eagles and a lone drop. He bogeyed the fifth but knocked it on the green for two at the par-4 sixth and holed out for his second eagle.

“The front nine was a lot tighter and shorter. I used driver on every hole except the fifth, where I hit a 3-iron straight into the bush,” said the 19-year-old Tuks student, who had three bogeys offset by a lone birdie on the home stretch.

“I guess the nerves and the heat caught up with me a little on the back nine, but 68 is still a decent score. I just don’t want to repeat that back nine on Monday.”

After the second round of stroke play on Monday, only the top 64 players will advance to the match play stage of the championship, which runs from March 2-5. They will play 18 holes on Tuesday and 18 holes in the morning and afternoon of Wednesday and Thursday respectively. The final will be decided over 36 holes on Friday Tuesday through Friday.