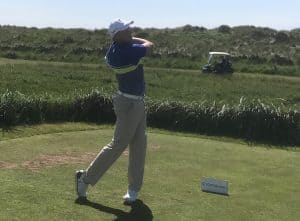 Venter made the most of the gloriously sunny conditions in North Ayrshire on Friday to rack up five birdies for a two-under-par 69.

The Silver Lakes golfer trails by five shots from co-leaders Alister Balcombe from England and Scotland’s Calum Fyfe, who shaved one shot off the previous course record of 65 set by Ryder Cup legend Bernard Gallacher and Irishman Jonathan Cardwell.

Meanwhile Higgo from Boland pencilled in three birdies to offset a pair of bogeys for a one under 70.

Next best was Matt Saulez from KwaZulu-Natal with an even-par 71, followed by Southern Cape’s Franklin Manchest, who returned a 74.

Recent Brabazon Trophy winner Kyle McClatchie birdied the 18th to sign for 78, while Marco Steyn took a huge hit with a double bogey at the par five sixth and a triple drop at the par three seventh. The Modderfontein golfer rallied with 12 straight pars from the 12th to limit the damage to 80.

The other South Africans in action at Western Gailes – Tom Watson, Gregory Royston and Jason Ackerman – registered respective rounds of 72, 74 and 86.