van Wyk, Ranked No.4 on WAGR 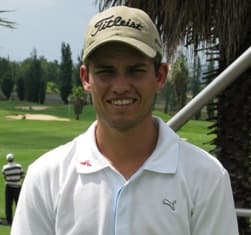 Nicol van Wyk is, according to the latest World Amateur Golf Rankings (WAGR), the 4th highest ranked player in the amateur game. These ranking, released weekly by the R&A, take into account performances of amateur golfers in tournaments all over the world.

The 24 year old South African from Western Province, in a space of eight days at the end of April, won a runner up medal in the New Zealand Stroke Play Championship and reached the final of the New Zealand Amateur Championship. The points earned from these performances pushed him up 21 places, in the previous week’s rankings, to 3rd. He drops one place in the current rankings.

He is the highest ranked South African on the current WAGR. Adrian Ford, also of Western Province, is next best in 26th place and JG Claassen, of North West Province, is in 52nd place.

Van Wyk has attained the highest ranking of a South African on the prestigious WAGR since 2006 when Dawie van der Walt, of Paarl Golf Club, who is now a professional, was ranked 2nd.

“I am really pleased to have done enough to be ranked so highly,” said the Western Province golfer. “This has certainly affected my immediate plans. Originally I intended to take a break over this period, but now with my latest WAGR position, there are a couple of overseas events for which I am exempt from having to qualify, like the British Amateur. So I am busy trying to put a trip together.”

“That was a great match. Members of the public came up to Scott and I, after the match, thanking us for the great golfing display we delivered to them. That was really something to remember,” said the likeable van Wyk.

Unfortunately van Wyk lost the final, to another Australian, Matt Jager, the next day. “Without taking away anything from Matt’s great performance, I really had put everything into the semi final match. I was not as sharp going into the final and it showed,” he said.

In September last year Nicol van Wyk was served with a three month ban from playing amateur golf after having been found guilty of breaching the rules of amateur status. During his suspension he was not eligible to play any amateur competitions, he lost all the points he had earned on the WAGR and the South African Golf Association’s Player Rankings.

The interesting effect this had on him is, which he openly admits, he came to realise how much he had been taking for granted. “It really put things into perspective for me and I began to appreciate all the opportunities that had come my way,” he explained. “I now appreciate being able to play golf, I enjoy the game more and I am more relaxed,” he said.

As with any young amateur golfer, who is on top of his game, the question of when will he turn pro arises. To this he answered “when I am ready.” He pointed out that he would like to give himself the best chances of succeeding in the professional ranks and to do this he wants to be prepared both mentally, physically and financially. “The last part is very important and I need to know that I have the resources that will give me the best chance,” he said with clear determination in his voice.