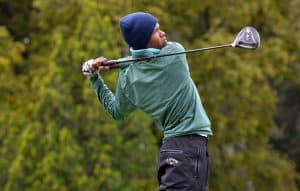 11 August 2018 – In-form Central Gauteng amateur Kieron van Wyk will be targeting a maiden win on the Sunshine Tour Junior Series when he heads into the final round of the Africa Junior Open at the Mantis Collection’s Fish River Resort near Port Alfred.

Just over a week ago, Van Wyk’s valuable contribution aided Curro Aurora to back-to-back victories in the SA High Schools Championship at Devonvale Golf and Wine Estate and he brought that winning form to Ndlambe on Saturday.

Rounds of 71 and 69 shot the Central Gauteng junior to the top of the pile on four-under-par 140.

Taking advantage of the sunny and gentle conditions, Van Wyk fired six birdies during his first trip around the Gary Player-designed championship layout, but gave shots back with a bogey at the first and double bogeys at six and nine.

He made a fine start to the second round with a birdie at the 10th and closed the gap even further on first round pacesetter Kian Rose with birdie number two at the par-five 16th.

The South African Golf Development Board member pulled well clear of the field with three birdies on the bounce after the turn, but cut his advantage dramatically when he made another double at the par four sixth.

Van Wyk will start the final round with Western Province golfer Samuel Simpson hot on his heels and Ekurhuleni duo Warrick Purchase and Casey Jarvis looming large in his rear-view mirror.

Simpson, who won the first Sunshine Tour Junior Series event – the Tshwane Junior Open – at Irene Country Club in July, trails Van Wyk by just one shot after rounds of 72 and 69.

Inaugural Bridge Fund Managers Junior Series winner Purchase went low on the last day of last year’s event and posted a 69 to tie for sixth. The Benoni golfer is two off the pace after rounds of 72 and 70.

Jarvis could be the danger man.

Ryan van Velzen, another Ekurhuleni junior who reached the finals of the first Bridge Fund Managers Junior Series, finished in fifth place on even-par 144. Rose from Central Gauteng followed an opening 69 with a second round 77, but he is still in the fight at one-over 145.