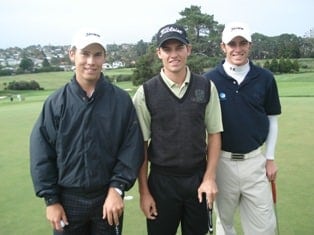 Bryden Macpherson, of Australia, who was the overnight leader and in the final three ball with van Wyk, recorded a 71, finishing three shots ahead of van Wyk to win the championship.

The conditions, like yesterday, were difficult created by strong gusting winds, which seemed to pick up as the day went on, providing the leaders, who teed off last, the worst of the weather.

Van Wyk will be well pleased with is 72 after his horrific start. He hit his drive out of bounds on the first hole. “He started off with a double bogey and a bogey, to be three over after the first two holes,” said Enver Hassen, president of the South African Golf Association and team manager.

He played steadily from the 3rd, playing the remaining holes in regulation with the exception of the stroke 1 12th hole, which he birdied.

The third player in van Wyk’s three ball was world No 1 amateur, also from Australia, Scott Arnold. He recorded a disappointing 78 to finish tied in 5th place. 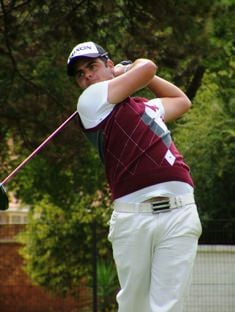 Dean O’Riley raised his game, after a disappointing third round yesterday. He recorded a one over par 71 to finish tied for 23rd place and a spot in the New Zealand Amateur Championship, starting tomorrow. His 72 hole total was 295.

Adrian Ford really struggled today, recording a final round of 80, ten over par, for a 72 hole total of 296, tying for 27th place, also qualifying for tomorrow’s match play.

Not so lucky was Steve Ferreira, the 19 year old Reading Country Club member from Central Gauteng. He knew he had to produce a good round to get into the match play and try he did. He finished with a 72, two over par, his best round of the championship, along with four other players recorded the fourth best round of the day. His 72 hole aggregate being 298, eighteen over par, moving him up the leaderboard.

Having finished his round early, Ferreira spent, what appeared to him inordinately long, in the clubhouse anxiously monitoring the leaderboard to see if he would move up into the top 32 after all was said and done. As it turned out he finished tied in 33rd place, one shot shy of qualifying for the New Zealand Amateur Championship.

It was disappointing for Ferreira whose 72 was quite remarkable. It included a triple bogey, a double bogey and five birdies!

Best round of the day went to Rob Noffke, of New Zealand, a three under par 67. This was followed by 71, one over, by three players, one being South African Dean O’Riley.

The draw for tomorrow sees three of the four visiting South Africans participate in the New Zealand Amateur Championship. The first round matches (16 in all) will be played in the morning and second round (8 in all) in the afternoon. Monday the quarter and semi finals will be played with the final, being decided over 36 holes, on Tuesday. All matches being played at the Titirangi Golf Club.

In 1998 Trevor Immelman was a losing finalist in this championship, the three South Africans will be striving to emulate Immelman or, preferably, going one better.

But before tackling New Zealand’s premier amateur golf championship, this evening the South African team are off to watch the Auckland Blues take on the Queensland Reds in a Super 14 rugby match at the North Harbour Stadium in Auckland, tickets courtesy of local rugby legend, Grant Fox. Ryan Fox, Grant’s son, is one of New Zealand’s top ranked amateur golfers. Grant Fox acted as his son’s caddie for the week.